My story is a story of HOPE.

I was diagnosed with pancreatic cancer when I was 42 years old and my son, Kurt, was not quite two. As most of you know, a pancreatic cancer patient’s odds of survival are not good.  But I was stunned to find out there was only a 6% chance I would live to see my son graduate from the 1st grade. 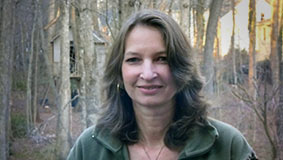 While the statistics that I read about were daunting, I did have a glimmer of hope.  Unlike 85% of pancreatic cancer patients, I was able to undergo the complex Whipple surgery, which is considered the greatest CHANCE for a “cure.”

Unfortunately, the pathology results from this surgery confirmed pancreatic adenocarcinoma, the deadliest of all major cancers.  And, it was not found in its early stages.  I had a positive margin.  The cancer had spread to my lymph nodes.  My prognosis was NOT good. After surgery I was given the standard radiation and chemotherapy treatment for pancreatic cancer, but, like so many others, the treatment did not stop the disease from growing and spreading (metastasizing). At that point, my doctors tried a different chemotherapy regimen that combined three different drugs.

This is where my path began to change.  Miraculously, the new chemotherapy cocktail shrank the “mets” that had grown in my neck and lungs.  It began to work. I continued on chemotherapy for over a year, when we decided to give my body a break.  I have not been on treatment for pancreatic cancer since that time.  It’s now nine years since my pancreatic cancer diagnosis.  I am not on chemotherapy, and I have No Evidence of Disease.

I am happy to report that my son Kurt is now ten years old, a rising 6th grader, and I am 100% here for him. I don’t know if there is a doctor anywhere who would have thought I’d be here today, but I am living proof that statistics are just that, statistics.

Many have helped me throughout my journey.  I have met some pretty amazing people BECAUSE of pancreatic cancer.  I became involved with the Pancreatic Cancer Action Network for many reasons. When I was first diagnosed I called into their wonderful PanCAN Patient Services.  They supplied me with educational materials, and research regarding treatment options.  Through their Survivor and Caregiver Network, I was able to talk with other survivors about their experiences. Later, I learned that the largest source of cancer research funding is from the federal government and administered by the National Cancer Institute (NCI).  I also learned that even though it’s the 4th leading cause of cancer deaths in the US, only 2% of the NCI’s research budget is focused on pancreatic cancer.

That is when I got mad.  That is when I became an advocate. The Pancreatic Cancer Action Network helps me focus my voice and my efforts; it unites me with other volunteers to do what we could not do alone. In January, through the efforts of many, the Recalcitrant Cancer Research Act, formerly the Pancreatic Cancer Research and Education Act was signed into law.  This is a huge step towards making progress against pancreatic cancer and other recalcitrant cancers.

We ARE making a difference.  And we want to continue to do so.