My name is Marcie and I am a nine-year survivor of a rare type of pancreatic cancer called neuroendocrine, or islet cell, carcinoma. Because its treatment options are vastly different than those for the most common pancreatic cancer, adenocarcinoma, I am sharing my story to help others with a rare diagnosis through their journey. 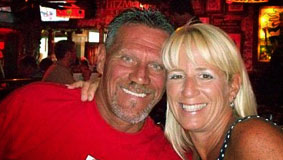 I am an operating room nurse and have always enjoyed taking care of patients. It was not until I became sick that I truly understood the fear and loneliness one feels when faced with a cancer diagnosis.

At the age of 39, I began experiencing vague stomach pains. While at work, I mentioned to a surgeon that I couldn’t get rid of this pain and it was becoming increasingly bothersome. He suggested running a blood test in our lab, which surprisingly showed acute pancreatitis. My whole world was turned upside down in that moment. A CT scan revealed a tumor in the head of my pancreas.

I will never forget the surgeon telling me I had pancreatic cancer and would be lucky if I lived three months. I immediately began searching for second opinions. I met a surgeon that felt I was a good candidate for a Whipple procedure. I knew from my job that this was a big operation. I performed a lot of research about surgeons for this complex procedure since I knew that experienced surgeons and institutions have lower complication rates for it. Luckily, I found one.

The surgery successfully removed the tumor. However, the surgeon said that my margins weren’t clear, which meant the cancer had spread and would show up again. My pathology report showed my tumor to be a non-functioning islet cell carcinoma. I was then offered chemotherapy and radiation, which I declined. My research showed that chemotherapy and radiation might have little effect for this cancer. I remained cancer free for almost 6 years after surgery, until a routine CT scan showed the cancer had returned in my liver and bones.

I was told that one of the most effective treatments for my cancer is internal irradiation with Yttrium-90-DOTATOC, which was not available in the United States, but was available in Switzerland. I underwent an OctreoScan, which I learned is a very valuable test for determining treatment options for neuroendocrine carcinoma. From this scan, I found that I was a candidate for the treatment in Switzerland.

I went to Switzerland and had two treatments, which were 8 weeks apart. They were painless, caused no side effects and I was home within a week each time. The treatment was a huge success! I am now almost 2 years post-treatment. I remain cancer free in my liver, and my bone metastases have not progressed. I take no medication, and I feel wonderful.

This type of treatment, also known as peptide receptor radionuclide therapy (PRRT), is being studied at this time in clinical trials for neuroendocrine carcinoma in the U.S.

I urge anyone diagnosed with this type of pancreatic cancer to seek treatment from an oncologist who specializes in treating neuroendocrine tumors.