I am 40 years old and a one year-plus survivor. My story starts April 2013. I woke up in the morning with pain and discomfort in my left side. Thinking it was from sleeping in a bad position, I just took some pain medicine and went to work. By lunch time, the pain had not gone away, and it was slightly worse. Knowing my body and knowing it was an unusual pain, I left work and headed to the ER. The doctors ran some tests and performed a CAT scan, where they saw that my spleen had infracted. But they did not know what had caused it. They kept me in the hospital for five days, took me off birth control pills and did an ultrasound of my legs to check for clots. After further examination of the CAT scan, they found something on my pancreas. I was discharged and an appointment was set up for an endoscopic ultrasound (EUS). 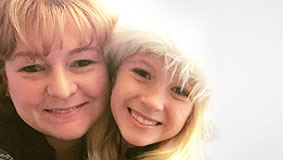 A couple of weeks later, the EUS was performed and a biopsy was taken. The doctor called a few days later, and he gave me the news that it was pancreatic cancer. I had never heard of pancreatic cancer, but just the word cancer was enough to upset me. My daughter, Sarah, was six years old at the time, and I had just recently become engaged. I could not let this stop me from living. I needed to fight this and win.

I immediately made an appointment with a surgeon to discuss my case. I was told the tumor was on the body of my pancreas, sitting on the artery to my liver. The surgeon referred me to a radiologist and an oncologist for chemotherapy and radiation, because the tumor needed to shrink in order to have surgery to remove it. The first plan was six weeks of radiation along with chemotherapy. After six weeks, my tumor had shrunk, but it was still not small enough for surgery. So my oncologist started me on a more intense round of chemotherapy in July 2013. It was rough, but I still worked and kept my spirits high. In November 2013, I finally heard the great news I had been waiting for. My tumor had shrunk enough for surgery! I never thought I would be excited to have surgery, but I wanted that tumor out of my body.

They stopped chemotherapy for six weeks to give my liver a chance to recover before the surgery. On January 3, 2014, I went to the hospital to have the tumor and my spleen removed. It was snowing that day, but as long as my surgeon was at the hospital, I would be as well.

The surgery was longer than expected because when they opened me up my liver did not look so good, and there was a cyst on my ovary. After running tests to determine the cyst was not cancerous, the surgery went on as planned. They removed the body and tail of my pancreas, along with my spleen and ovary. After healing from surgery, I was told I would have six more months of chemotherapy to treat any cancer cells that were still floating around in my body. I had my final chemotherapy session in August 2014 and went back to work full time.

I try to live my life to the fullest every day. I am telling my story for others to know that there is hope. I thank my doctors and nurses for all that they have done for me. And a special thank you to all my family and friends, especially my daughter Sarah and fiancé Dennis, for keeping my spirits up and taking care of me through my recovery.