Having grown up in Alabama, I am well acquainted with the month of August. With its meteorological extremes of heat, haze, humidity and a dearth of rainfall, I have grown to despise it, longing for the more reasonable temperatures and lower humidity brought on by the advent of fall. However, in 2002, I acquired another reason to loathe the eighth month of the year, for on August 6th, I was forced to come to grips with my own mortality when I was diagnosed with pancreatic cancer. 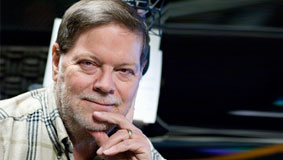 I really can’t describe my reaction to the consultation with the diagnosing physician; I was more stunned and angry at the news than scared, but after spending time on the Internet and reading dismal statistics on survival rates for two years and five years post diagnosis, I knew that I would be locked in a fight for my life. I also knew it was a fight that would sap my physical and emotional strength, not to mention place an enormous burden on my wife of just over two years. I resolved to fight as long as I could breathe, for I knew that as long as I could breathe, I could fight. I also relied upon not only the support of my family and friends, but also my faith in God.

The world-class reputation of the cancer center where I was treated is well-known, and I was also aware that U.S. News & World Report ranked it among the top 20 cancer facilities in the nation. So when it came to treatment, there was no doubt in my mind where to seek it. In September 2002, I met with my oncologist and my radiation oncologist. I distinctly remember telling them, “I don’t know the meaning of either quit or lose, and failure is not an option, so let’s go to war!” Later that month after some tests, the pancreatic cancer surgeon performed an exploratory procedure to determine if a pancreatic resection could be attempted, but because a portion of the tumor was abutting the aorta, surgery was ruled out. Nonetheless, with a twinkle in my eye, I told the surgeon, “Don’t count me out; we’ll see each other again!” For the moment though, it was time for Plan B.

The battle was joined amid prayers and daily chemotherapy. From late October until early December 2002, I stayed at the Joe Lee Griffin Hope Lodge. Each weekday morning, I received radiation treatments from and exchanged the occasional sharp-tongued but good-natured barb with my radiation therapist and her colleagues. The chemotherapy continued until the fall of 2003. Oddly, at no time during my battle with cancer did I experience adverse effects from either the chemotherapy or radiation.

Throughout the ordeal, the tumor marker continued to drop. In June 2004, the tumor was less than half its original size and appeared to have backed away from the aorta. All seem mystified by what had transpired, but I just politely smiled.

Again, there was talk of surgery, and, on August 10, 2004, the surgeon successfully removed the diseased portion of my pancreas and my spleen. Indeed the tumor was history, for all that was left where this once feared adversary took up residence was scar tissue. It had been beaten to a pulp by aggressive treatment, not to mention divine intervention.

When I was transported to my room following surgery, I still felt the effects from the anesthesia, but my wife, sister, brother-in-law and mother who were waiting for me say that I was telling jokes. Apparently the surgeon told them that he found an adhesion and had to repair my colon; and in my stupor I somehow managed a wise-crack about now being the proud owner of a semi-colon! Five days later I was home in Tuscaloosa and continuing my journey on the road to recovery and down the road of life.

What impressed me the most (other than the fact that I received treatment in an exceptional facility administered and staffed by some of the best medical professionals in the United States) was the fact that at no time did I feel like the sequence of numbers on my orange wristband. Everyone, including the orderlies, patient technicians, nurses and physicians, seemed genuinely interested in me as a person. I beat the odds and in doing so threaded the needle. I am now among the one to two percent of pancreatic cancer patients who live to be cancer-free.

Now, I proudly but humbly display the pathology report on the surrendered portion of my pancreas and spleen on the wall of my office. I have highlighted in yellow the following words: “No residual malignancy.” My family and I have three new heroes, the physicians who diagnosed and treated my pancreatic cancer. In fact, we’ve adopted them, and they will always be part of our family.

As for me, I still hate the meteorological extremes of heat, haze, humidity and the dearth of rainfall associated with August in Alabama, but now I also have a very special reason for August being one of my favorite months, second only to April, for that’s when I married my beloved Lydia.

Mr. Carter’s 37-year career in classical music broadcasting has taken him from Montgomery to Philadelphia, New York City, back again to his native Alabama, and onto Kentucky. Mr. Carter left Alabama in 2005 for a position with the radio stations of Eastern Kentucky University in Richmond, Kentucky. He is still employed there and was declared clinically cancer-free on August 10th, 2009, the fifth anniversary of his pancreatic resection. Today, he enjoys spending time with his wife Lydia, their children and writing poetry and short stories.