It started with a severe stomach ache in August 2008 that hurt through to the back.  I was 58 years old.  I went to the emergency room and was diagnosed with pancreatic cancer.  Further testing revealed that it was neuroendocrine pancreatic cancer with metastasis to the liver.  The tumors were non-functioning, not causing any side effects except severe stomach aches every year or so. 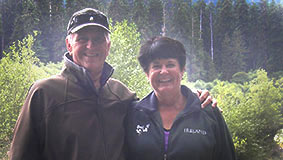 I went to a local oncologist who was unfamiliar with this type of cancer.  He referred me to a high volume hospital for pancreatic cancer in Seattle and a doctor who specializes in pancreatic cancer.  The doctor said that I had too many tumors to operate, so he put me on monthly injections of hormone therapy to keep things stable.  In February of 2011, CT scans showed that my tumors had grown.  I was then put on a regimen of two chemotherapy drugs as well as the hormone therapy.  In June 2012, my tumors had shrunk enough to make surgery an option.  I was sent to a surgeon who specializes in pancreatic cancer at another high volume hospital for pancreatic cancer.  My surgery was a two-step approach.  The first step was the Whipple surgery on June 28, 2012, followed by a partial liver resection and stomach hernia repair 8 months later on February 28, 2013.  They have now removed all visible tumors in the area where they said surgery was not possible.  I will now continue my quest of hiking as many trails as I can in the northwest.