It all started with an itch.  It was February and I had my typical winter cold and the itch started just as I was coming off a round of antibiotics.  I went back to urgent care, and they assumed it was a penicillin allergy and gave me a high grade steroid.  This knocked the itch away but in April, it came back stronger than ever.  It felt like I had rolled in fiberglass; I was itchy head to toe.  It was an itch like I had never had -- in my fingers, my eyes, and even my ears.  Nothing helped ease the pain.  I struggled with this for about three weeks and it grew to the point where I was not able to sleep.  I was literally breaking down from exhaustion. 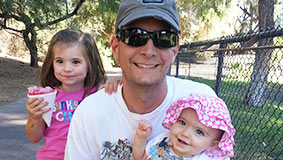 Leading up to this, I had always been healthy.  I was very active, didn’t smoke, and only drank occasionally.  Because I’d always been in good health, I didn’t have a family doctor, so anything wrong was always addressed through an urgent care.  So, I got on my insurance website and found the closest doctor to my office and begged for an appointment.  I was able to get an appointment on a Monday.  As I met with the doctor and he did his exam, everything seemed normal.  I had no physical signs, no jaundice -- just itching.  I did have some changes as far as digestion goes, and maybe that’s what triggered something in his mind.  He ordered labs, and if you know me this is where it becomes real, as I hate needles and had never had a blood check.  Tuesday, he ordered an ultrasound which was followed by a CT scan.

That night, the results came in and he immediately called me and opened his office just so my wife and I could have the consult that night.  They found a tumor and he was suggesting I meet with a surgeon with whom he had already scheduled an appointment.  My wife and I met with the surgeon on Wednesday and I was scheduled for surgery that Friday.  It was a very quick process, and at this point we just knew it was a tumor, but no one had mentioned cancer.  In hindsight, I think this was to keep our stress levels down.  After 10 hours of surgery (a Whipple procedure) and 8 days in the hospital, they finally announced the finding.  At the age of 34, I was diagnosed with pancreatic cancer.  As it turns out, the tumor which was on my pancreas, was pushing into my gallbladder which caused it to produce too much bile for my body to process, leading to the itching.

The next 12 weeks all dealt with recovery, getting appointments set up with oncologists, and establishing a game plan for chemotherapy and radiation treatments to battle this disease.  I was lucky enough to get into a hospital in Texas who sees a high volume of pancreatic cancer patients and whose doctors developed a plan for me.  We then found a local oncologist in Phoenix who would work alongside them and administer their plan.

If I can give any advice, it’s to go in fighting and no matter what, stay positive.  I truly believe a positive attitude can be a game changer.  Get the facts and fight for yourself.  You deserve the best.  Get the best doctors, take the best medicine, and find the right support groups.  It’s your life so take control, and don’t take no for an answer.  The Pancreatic Cancer Action Network is a great place to start; we also found a ton of stuff at the hospital I went to in Texas.  I would like to thank my family and friends for giving me the full support I needed.  I am truly blessed to have them in my corner.  I couldn’t have done it without you all.  On May 20, 2014, I will be 3 years cancer free!