Beginning in 2010, I started having pancreatitis, which resulted in two hospital stays. Scans showed an area of concern on my pancreas. After having my gallbladder removed and two biopsies, both of which came back inconclusive, my doctor took a “wait and see” approach. But it wasn’t until my physician gave the green light to go on a cruise that my life became a nightmare. I ended up in the ship’s infirmary with yet another bout of pancreatitis. I was taken off the ship by ambulance and transported to one of only two hospitals on the island of St. Maarten. Five rough days later in an open air hospital, their CT scan indicated something on my pancreas. 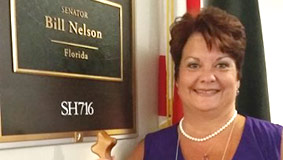 After coming home, I went to the same doctor I had seen before, and he sent me across the street for bloodwork and again told me to just wait. I was furious! I called and got into a high volume pancreatic cancer hospital in Jacksonville, Fla., and within two weeks, I was diagnosed with pancreatic cancer. On August 17, 2012, I had the Whipple surgery followed by chemotherapy, radiation and then additional chemotherapy to end my treatment. I was diagnosed with stage IA pancreatic cancer and I am now cancer free. In fact, August was my three-year anniversary.

My faith brought me through this disease, along with the love of my family. I have learned to appreciate and value every daily task and to never take anything for granted. I had the wonderful opportunity to attend Advocacy Day this year, and it will not be my last. My journey has come full circle, for now my mission is to Wage Hope for all affected by this monster. I will never, ever give up! Remember – you are your own best advocate!