In March of 2008, at the age of 45, I experienced the most excruciating abdominal and back pain.  I got in to see the physician’s assistant at my doctors’ office.  Upon an examination he determined I was having a gallbladder attack.  He prescribed me some pain meds and sent me home.  A few hours later, I started vomiting uncontrollably and my husband took me to the ER. 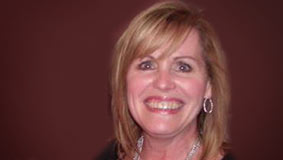 They took blood and said I had an acute case of pancreatitis that they thought was being caused by a gall stone.  Twenty-four hours later I was in the operating room having my gallbladder removed.  I recovered easily from the surgery and was good to go.

Six weeks later, I was back in the ER with that same abdominal/back pain.  They thought maybe a stone was stuck in one of my ducts, so I had an ERCP.  There was no stone, but they thought I had a condition called pancreas divisum, a birth defect.  We figured I had always had it and hadn’t bothered me, so all should be well.  Well, in another six weeks I had another pancreatitis attack; this one was the worst.  My doctors decided to send me to a specialist in Indianapolis to see if he could do anything to treat the pancreas divisum.

My husband and I, and our youngest daughter, drove to Indianapolis from Wichita, KS to see the new gastroenterologist.  He looked over all my scans and explained to me what he would be doing.  I checked in as an outpatient the next morning and when I woke up from the procedure I was met by a surgeon explaining that I had a mass in the main duct of my pancreas.  He explained that he believed it was a pre-cancerous condition called an IPMN, but if left it would surely turn to cancer.  I would need a Whipple procedure, and it would need to be done fairly fast.

My husband, daughter and I returned to Kansas with a surgery date of August 27, 2008.  It would take some time to get insurance approval and arrangements made to be away from home the weeks it would take me to heal.  My husband and I returned to Indiana alone to face this surgery together.  Our children at the time were ages 21, 18 and 15.  Two were in college and the youngest a sophomore in high school.  I explained to them that the surgery was very serious, but their job was to do well in school and carry on.  I didn’t want them to worry, I just wanted them to take care of each other.

I was the first surgery of the day.  I was in surgery for around six hours; I can’t imagine how my husband must have felt in a strange city and waiting room all by himself.  The doctor came out and explained that everything went a well as could be expected.  The pathology would take a few days to get back.  I was pretty out of it, but by day three they told my husband that I had a leak at one of my connections and they would need to go back in and fix it, as I was septic.  He says things moved pretty quickly, but they took me in and immediately found the leak and fixed it.

A few days after that second surgery the surgeon came in and told us the pathology had come back showing I had stage IA acinar cell carcinoma: I had pancreatic cancer.  I had read enough before my Whipple to know that this wasn’t good.  I returned to Kansas to finish healing.  Healing happened very slowly for me, as I was suffering from severe delayed gastric emptying.  My stomach would just not wake up.  I was having vomiting from the bile that could not escape my stomach.  I re-entered the hospital in Wichita for nutritional support and had a NG tube put back in to relieve the vomiting.  I continued to have a lot of problems and the local surgeons made the decision to go back in and look around to see if something was wrong.  They found I had a kink in the connection at my stomach, they repaired it and I finally healed.

I returned to work a week before Christmas.  It was long and it was hard, but I made it!  I underwent adjuvant chemotherapy.  I am currently NED (no evidence of disease)!!  When I was faced with the statistics of pancreatic cancer (even at stage IA they were dismal), I told my oncologist, “Five years isn’t long enough for me to see my children realize their greatness, so find something better than that.”

I don’t know if I will always remain cancer free.  I’ve talked with people who were seven years out and it came raging back.  I just know for now I am grateful for my time.  I reach out to people locally and across the country to try and help them find the balance of living life and being vigilant about their health.  I also try and offer any advice I might have as to complications from pancreas surgery, because Lord knows I had plenty.  I wrote this hoping this offers some encouragement!  God Bless!