In the spring of 1995 I had my gall bladder removed. Fast forward a year, I started feeling the same way as I had a year earlier. I finally called the family doctor and he had me come in to the office. He said maybe I had a leftover gall stone blocking the bile duct. 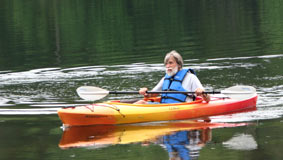 Arrangements were made for me to get an ultrasound at the hospital.

My wife was the chief technician on the CAT scan machine, so I knew a lot of the x-ray technicians. The girl doing the ultrasound was a friend, so jokingly I asked her if it was a boy or a girl. She didn’t say anything and got the radiologist right away. He came in and looked and said he would be right back. Then he came back and told me they were going to take me across the hall and do an endoscopy. After the endoscopy and a CAT scan, they realized that reason I felt bad was because the duct was blocked by the pancreatic cancer. It felt the same both times, but for two different reasons.

From the scans it looked like the Whipple may be able to be done, so I was scheduled to go to surgery. But the doctor and his team opened me up and could not remove the tumor. As I was in the recovery room, one of the surgeons asked me to hold her hand. I remember saying to her that she was cute but I was married and why would I hold her hand? She said “because I am good at times like these. We couldn’t remove the tumor and you have two young children that you need to go home and enjoy the next three months.” I also remember my thoughts being “I don’t believe her; I am not that sick and I don’t feel that bad.” It just didn’t seem real or that it could be true. I didn’t feel like this was the end.

Three weeks later, I finally went home but was still getting my food through a port in my neck. I couldn’t eat anything and keep it down. Right after the 4th of July 1996, I entered the local hospital here for my first round of chemotherapy and radiation therapy. During the next week I was getting radiation every day, but it was driving me crazy to sit at home. I was now able to eat and was no longer hooked up to a pump so I decided to come back to work.

After the chemotherapy and radiation regimen was over, and I had all the radiation they would allow, we did another CAT scan. It showed no change for better or worse.

The FDA had released gemcitabine (Gemzar) that spring. My oncologist decided to try it on me. She had never used it before. I asked her how long I could take it. “Forever” was the answer, so I said let’s get started. That was in August of 1996. In the spring of 1997 the surgeon agreed to try to do the Whipple again. And again it was not doable. No amount of begging or pleading would sway him to try it a third time. So I just stayed on chemotherapy. In 1999 she said we should stop with the chemotherapy, but I reminded her she told me I could take it “forever.” So she said okay, we will go longer, but I am going to order more tests and if there is no change I am going to cut your umbilical cord to the chemo.

The tests in the spring of 2000 were consistent with tests from before, and true to her word she took me off chemotherapy.

During all of this time I was having a CAT scan every 3 months. It never showed any big change. At the very end of me being on chemo the CA19-9 blood test had been developed. I had one of those and it came back normal. After we stopped treatment I continued with the CAT scan at first every 3 months then increasing to six months and then yearly. I also kept having the blood test. It has been a couple of years since my last CAT scan. I still have the blood test once a year.

My oncologist retired shortly after she set me loose. The radiation therapy doctor was pregnant when she treated me and now her “baby” is in high school. The doctor that did the initial endoscopy and two of the radiologists that treated me have retired. My son (eight at the time) has now graduated Summa Cum Laude from college and is teaching English literature at our high school. My daughter (who was two and a half at the time) graduated valedictorian of her high school class this past spring and is going to the University of Maine studying chemical engineering. My wife is now the radiation and pulmonary department manager at one of the satellite hospitals connected to the main hospital here were I received most of my treatment.

After I was diagnosed, I was talking to my dad and I said to him that I should step in front of a bus and have it over with, so they all wouldn’t have to suffer through the bad time. He said no, that I had a job to do and it was to fight. He said, “You got two kids to bring up and get started in life. That is your job and you have to fight to keep it.” I listened (probably one of the few times that I did) and thank God everyday for letting me do my job. I really wanted to see the kids grow up and be there for my family. Without the support and guidance of my wife I am sure it would not have happened. She was my advocate and navigated me through the system. Other friends told me of people beating cancer that inspired me as well.

This has been an incredibly amazing journey. I knew nothing going into it. When I was told I had a tumor I thought I was lucky enough to have it all in one place. Little did I know. I wonder to myself, why would I be spared when so many are not. Pancreatic cancer is not discriminatory but at lot of far more talented people than myself have been taken by it. I will never be able to repay the support from friends, family and medical staff that I have received. I have communicated with many others through the Pancreatic Cancer Action Network. My hope is that I can prove that things can happen and that you can win.

My first prayer was answered in that I am still here for the family. My other prayer is that a cure for this can be found soon.