I was diagnosed two years ago, August 2, 2011.  I felt very poorly for months.  I went to physicians in my hometown and was given no explanation for my symptoms. 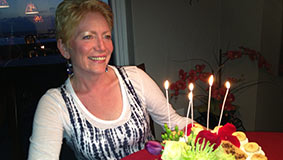 By happenstance, I was able to get an appointment at a large research hospital and was diagnosed with a mass on my pancreas within about 24 hours.  I received seven months of chemotherapy and radiation, then surgery a month later to remove almost all of my pancreas.  We lived out of state for almost nine months.

I am now over two years out from diagnosis.  I have a daughter with congenital heart disease.  Serving God and being here for her and my husband are my upmost priorities.  One of my physicians said I should send you my name and pic…I am a survivor!