After coming home from a business trip, I felt a little under the weather.  I went into work the next day, but I had to leave early as I seemed to be getting worse and was vomiting.  It lasted two days until I could not handle it anymore.  I asked my brother to watch my son while my boyfriend took me to the ER.  They first did an ultrasound because I had been vomiting so badly.  That was when they found a mass in the head of my pancreas; further testing showed it had spread to my liver. 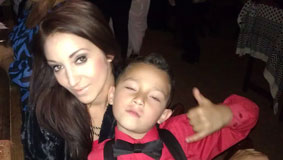 After being in the hospital for nearly a month, I was finally released after they made the diagnosis.  Then it really set in.  I have a six-year old child; I’m not ready to go anywhere!

My first visit to the doctor after my initial diagnosis was when I was told I had malignant pancreatic neuroendocrine tumors (pNETs).  After many scans and careful thought process, my oncologist and surgeon decided it was best I have the Whipple procedure if it was possible.  On May 14th, I had a 17-hour Whipple procedure where the surgeon removed 23 tumors.  My beautiful grandma, Zoila, passed away one day before my surgery. I felt like she gave her life for mine.

This cancer has changed my life because, like many, I was living half awake; not appreciating life, as precious as it is.  I don’t take one day for granted and I am grateful for every extra minute, hour, and second God has given me to be here to watch my son smile.  God bless and fight on!  Your mind is as powerful as your body!!!