In the fall of 2011, I noticed that I would feel very full after eating, even a small meal, and it would last for many hours after I had eaten.  I also noticed I was having oily stools from time to time.  I didn’t think much of it at the time, brushing it off as “something I ate.”  However, when the summer of 2012 came around, I started losing weight, and then I knew something wasn’t right.  My general practitioner couldn’t figure out what was wrong with me, and an abdominal CT scan was negative.  Because my symptoms persisted, I kept pushing for answers and went to a gastroenterologist. 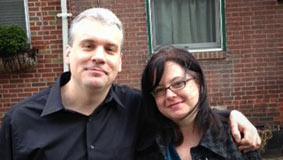 He initially didn’t feel that anything was wrong with me, but I raised the issue of a pancreas problem, because my symptoms were consistent with that, from the research I had done.  He ordered a pancreas protocol MRI and a suspicious area was noted on the pancreas.

I went to a cancer hospital near where I live, and an endoscopic ultrasound was done, which confirmed a neuroendocrine tumor of the pancreas.  I saw a world-renowned surgical oncologist who specializes in pancreas surgeries, and he recommended the Whipple procedure, which I had on July 16, 2012.  Fortunately, it was a clean removal -- the margins and lymph nodes were clear, and there were no metastases.  The surgeon did not recommend any chemotherapy or radiation.  I had a difficult post-operative course with many complications, but by the fourth month after surgery, I had returned to work and resumed doing my volunteering at a local animal shelter.

I just passed the one-year mark and there are no signs of recurrence.  And, I recently got married to a lovely woman!  Life is good -- I’m happy, healthy, and look forward to many years of being happily married and continuing with my volunteer work to help homeless animals.  Life is great!  I beat this cancer, and you can, too!