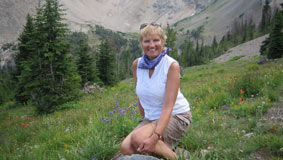 Newly retired in December 2005, I was living a “life of leisure” and was looking forward to spending much of the winter skiing in Sun Valley, Idaho, and having fun with friends; maybe taking a year to figure out what I wanted to do with the next chapter.

During our 10-hour drive to Sun Valley in January, I complained to my husband, Al, that our next SUV needed to have more comfortable seats for long drives. I just couldn’t get my back in a comfortable position. In the coming weeks, I found myself popping ibuprofen more frequently, adequately addressing the discomfort in my back and chest. This remedy remained in place for several months.

In late spring, I commented to my internist that the lingering discomfort was perhaps caused by a sports injury. He felt it would be prudent to determine whether my theory was correct. An ultrasound led to further tests; by mid-August, at age 52, I was diagnosed with an exocrine tumor of the pancreas, called adenocarcinoma. As is the case with the majority of pancreatic cancers, it was unresectable (inoperable) because the tumor was wrapped around major blood vessels.

A laparoscopy followed and confirmed that some spots on the liver were simply birthmarks, not metastases, allowing radiation of the pancreas to be part of an aggressive five-and-a-half week treatment protocol that also included the use of two chemotherapy drugs. This treatment protocol is considered intense and overly toxic by many professionals in the field, as it could cause severe weight loss, among other side effects. Since I was in excellent overall health at the time of diagnosis, I wanted to have the most aggressive treatment possible, and so I did. I was so very fortunate to have this treatment option available locally, in the Seattle area.

The resulting anorexia was more of a problem for my caregivers – my husband, Al, and my dear friend Jan. I didn’t feel like drinking water or eating. They felt compelled to scheme about ways to get me to eat anything! I lost 20 pounds. Weighing 117 pounds on my 5-feet, 8-inch frame was not an ideal look!

Six weeks after completion of treatment, the CT scan revealed that the tumor had shrunk by 80 percent. By February 2007, the subsequent CT scan could no longer detect the tumor. Now I was on a nine-month combination chemotherapy protocol.

The predictable hair loss was counteracted with synthetic wigs. I never had a bad hair day – Erin, Skye and Mandy (yes, the wigs came with names) were always at their best. That is, until I “fried” Mandy one night, removing a tart from an oven.

With good fortune, I managed to feel well during the entire chemotherapy treatment, and resumed hiking, playing tennis and working out.

Alien Tumor (A.T. as my friend named it) packed his suitcase and moved north, to a lymph node above my clavicle, in October 2007. Since I had responded well to the chemo-radiation on the first round, it was determined to apply a similar approach for a six-week period. I asked my oncologist if I could ski with the re-installed PICC line and the chemotherapy pack. He didn’t think that was a winning idea. I could see his concern, but nonetheless, I decided to ski (with friends forming a protective barrier of security around me). I was happy, it worked just fine, and I brought photos of “The Infusiastic Skier” to share with my medical team.

I’ve been on work release from treatments since the end of January 2008. It’s been 10 years since my initial diagnosis. I am so grateful my treatment protocol worked on my type of tumor. I’m enjoying perfect health. I continue to have routine CT scans and blood tests each year.

As a very fortunate survivor of pancreatic cancer, it’s now my calling to work on behalf of this cause.

This includes fundraising and creating awareness for the Pancreatic Cancer Action Network through local events, connecting people within the pancreatic cancer community, offering hope to newly diagnosed patients and their families and lobbying our legislators for increased emphasis on research and NCI funding for this disease.

I am proud to be a volunteer member of the organization’s Survivor and Caregiver Network (offered through PanCAN Patient Services) – a volunteer role that gives me a chance to speak with patients and offer information, encouragement and hope.

My husband and I are donors, as well – our strong belief in the work of the Pancreatic Cancer Action Network leads us to include the organization in our annual charitable giving plan. And, we are big believers in planned giving – one day our estate gift will allow us to help advance the mission of the organization when we’re no longer here.

It’s been an honor for me to be part of the significant work of the Pancreatic Cancer Action Network. Progress has been made, but there’s much more to do. That’s why we need more people to help make a difference. And everyone can. Please join us.