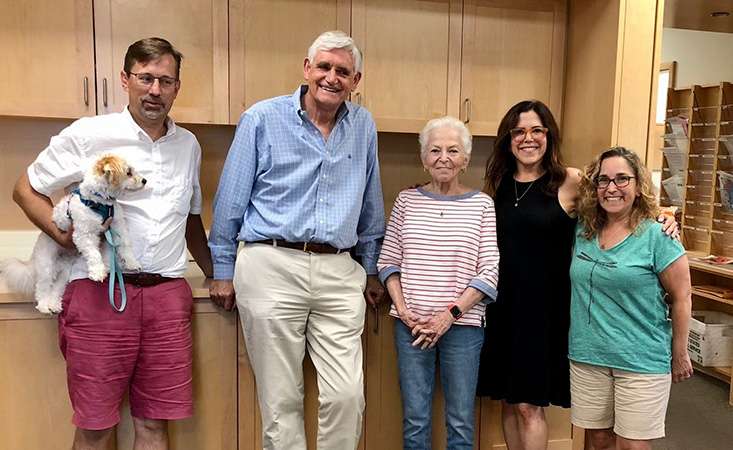 Editor’s note: This article was written by Lauren Postyn, full-time caregiver for her mother, a pancreatic cancer survivor. Lauren chronicles life experiences on her blog from her home in Raleigh, N.C.

I recently had the opportunity to accompany my mother on a trip to New York to visit family.  This was the first visit for both of us in a very long time, and frankly, we weren’t sure it was ever going to happen.  The regimen of chemotherapy my mother endured left her winded and weak, and I was worried she wouldn’t have the strength to travel.  Under her oncologist’s advice, we paused her treatments and agreed that this was a good time to take the trip. 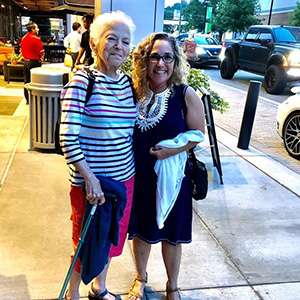 Susan and Lauren in New York

My sister planned the entire visit, made the reservations with Delta, and cashed in points to upgrade my mother’s seat.  Delta’s royal treatment included incredible passenger assistance reps who provided curb to gate chariot service on both legs of the journey.  Thankfully, the trip to New York was a breeze.

My mom, also known as The Queen of Everything, a moniker her siblings gave her growing up, presumably for her ability to take charge, is the eldest of four.  It’s no wonder the title stuck! The plethora of information she has stored in her brain, the uncanny ability to turn a frightening situation into something manageable, or her endless amounts of energy always have me marveled. The Queen of Everything title is certainly fitting as my mother has always been the go-to person literally for everything. Once we decided to fly our mom to New York, my sister and I gladly served as her ladies in waiting, assisting our Queen with packing, setting up her social schedule, and organizing her calendar to hold court while in New York.

Armed with masks, face shields, and disinfecting wipes, we embarked on our journey.  Since my mom needed some extra assistance, she boarded the plane before anyone, christening first-class with her regal presence. The short flight from Raleigh to JFK took off and landed without incident. As we deplaned, my mom insisted on grabbing her carry-on bag, ignoring our pleas of, “Leave it, Mom, we’ll grab it!” from a few rows behind.  Other passengers in neighboring rows found the exchange of a mother ignoring her children quite amusing, one even commenting, “They grow up so fast.”  Fiercely independent, my mom pulled her bag off the plane and walked to the waiting chariot (AKA, the wheelchair). She greeted the waiting attendant on the jetway, who held an iPad with her name lit up like a marquee.  She said, “How do you do?” as he took her hand to help guide her into her seat. The attendant treated her with quiet admiration as if he knew what we all felt, how lucky we are to be in the Queen’s presence. 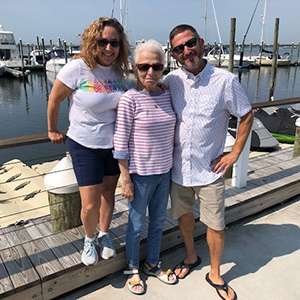 The kind man led the way in the unfamiliar and uncharted territory of the re-imagined Delta terminal at JFK, as our Apple watches recorded  9,000 steps and counting toward passenger pick-up.  As we walked down the long corridors, up and down the terminal elevators; it was as if everyone knew our Queen had arrived. My sister recorded a video of my mom arriving, and without hesitation, she perfected the royal wave. My brother Jon, the Queen’s prodigal son, arrived moments later to make the trip complete. Jon jumped out of his car and enveloped my mom in a bear hug as the attendant loaded the luggage.

Upon arriving at her Majesty’s sister’s manor, we visited the Lord and Lady of Rockville Centre. To show their devotion to the Queen, they had decorated the doorstep with a display of colorful balloons, a noble gesture indeed.

Throughout the week in New York, many visits from friends and family ensued, where the Queen held court at her sister and brother-in-law’s manor. His Lordship, Michael of Rockville Centre, waited on her hand and foot, providing ample sustenance to her Majesty morning, noon, and night. And most importantly, he served libations and canapés at sundown.  The Queen’s family, Lord and Lady Brown of Morristown, Lady Vicki Schultz of White Plains, and Lady Jennifer Schultz of West Palm Beach, had an audience with her royal highness, spending time with the matriarch of the family. 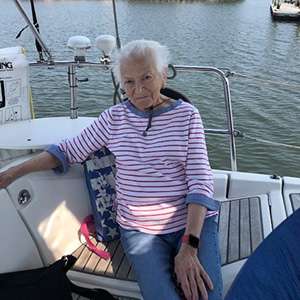 A few days by the ocean, soaking up the sun, walks around the estate enjoying the warm temperatures, and bountiful meals were enjoyed by all. On the last day of the week, the Queen and her ladies in waiting (my sister and I) traveled along country roads to visit Huntington and Cold Spring Harbor, two beloved towns the Queen spent a good portion of her life.

We drove through the quintessential towns, reveling in how much has changed and how much has remained the same.  We visited the cottages from her progeny’s early years and the famed Cold Spring Harbor Laboratory, where the Queen held a prominent position of Director of Grants & Contracts for 28 years. As Director, our Queen oversaw the distribution of grant money awarded to prominent scientists, many of whom have reached nobility themselves by earning titles of Nobel Laureates.

Upon arrival, we reminisced with her former colleagues and had many laughs, hugs, and tears. On this particular Friday, the three of us accompanied the Queen in meeting with the President of Cold Spring Harbor Laboratory and the Principal Investigator in charge of developing treatments in pancreatic cancer.  Both are two loyal servants in the continuation of scientific discoveries in the fight for a cure.

We wanted to thank them personally for their assistance and guidance from the moment the Queen was diagnosed four years ago.

The Queen of Everything is living proof and a testament to the groundbreaking research currently being conducted. She proclaimed her continued support of their efforts now and in the future.

As the week in New York came to a close, the Queen’s wishes were met with overwhelming support from her adoring family.  The Queen of Everything returned home, well-rested and recharged, to the county of Durham, N.C., where she is actively planning her next official visit.