Volunteers  The Courage of One Is the Inspiration for Another

The Courage of One Is the Inspiration for Another

“I was inspired by my brother’s commitment to make it to PurpleStride DFW 2013, even though he was in the hospital the night before. I remember him being engulfed by a ‘sea of purple’ with family and friends by his side. It was an amazing day and I’ll never forget his courage and strength.” 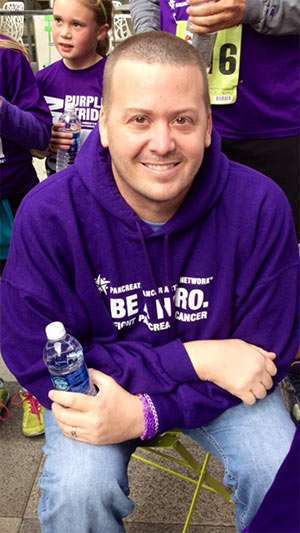 Loretta Connolly’s brother, Jimmy, at PurpleStride DFW 2013. He is Loretta’s inspiration to Wage Hope and to be a champion in the fight against pancreatic cancer.

Loretta Connolly remembers that day as her brother, Jimmy, who was diagnosed with pancreatic cancer in 2012, showed he was determined to live life to the fullest. Jimmy was Loretta’s little brother, the second youngest of seven kids, in his early 40s, a husband and father of two young boys.

When hearing about his diagnosis, Loretta remembered learning about the Pancreatic Cancer Action Network from a friend, whose brother had been diagnosed with pancreatic cancer in 2004. Her friend said that they felt supported by the organization, which provided much-needed resources.

Eight years later, when trying to find the answers her family needed about her brother’s disease, Loretta knew exactly who to call.

“I wanted to reach out for support and find out about clinical trials in the Dallas area. Our family and I needed to get as many questions answered as possible so we could help Jimmy beat pancreatic cancer.”

After Loretta and her daughter, Brooke, attended monthly affiliate meetings in San Diego and participated in PurpleStride San Diego 2013 where they lived, they moved back to their hometown of Dallas to join the local movement and be close to her brother and the entire family.

“When we moved back to Dallas, my three sisters and I started the PurpleStride DFW (Dallas-Fort Worth) team, ‘It’s All Good’ in 2013. Our team was the top fundraiser our first year, raising over $37,000 with 227 team members in support of Jimmy,” she said.

When Jimmy passed away in September 2014, Loretta knew she had to continue to fight and champion the cause not only for her brother, but for his two sons. Volunteering with her family allows them to take action and join a powerful community that understands what it means to be impacted by pancreatic cancer.

“There are so many amazing people whose lives have been affected forever by this devastating disease. The similar experiences really create a lasting and unbreakable bond.”

Loretta eventually took on the role of PurpleStride Chair in the DFW Affiliate so she can make an even bigger impact. 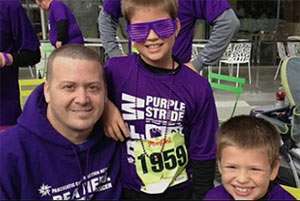 Jimmy and his two sons at PurpleStride DFW 2013.

“Being a new PurpleStride Chair and volunteering for this organization gives me a tremendous source of strength in taking action against this undiscriminating cancer,” Loretta said.

“I have some large shoes to fill but my affiliate is so committed, passionate and supportive. I’m confident that together, we will raise awareness and much-needed funding.”

Not only is Loretta a champion for the cause through her volunteering, but she has also dedicated her career to helping others affected by pancreatic cancer and other cancers: She works for Celgene, a biopharmaceutical company that participates in pancreatic cancer research. Loretta started working at Celgene fourteen months after her brother passed away.

Since Loretta helps those affected by pancreatic cancer both in and outside of work, she has a unique perspective on championing for this cause.

“It’s extremely empowering to champion for pancreatic cancer patients and their families through volunteer work and my career with Celgene, she said.

“To know I have the unwavering support of my company in everything I do in my volunteer work is a phenomenal feeling. Being an advocate for pancreatic cancer patients is not just a volunteer position or a job, it’s a fully invested commitment by my entire family and myself to honor our brother. We want to do everything in our power to help end this devastating disease.”

Her brother’s memory remains at the center of her work.

“I see my brother in every cancer patient. His courageous journey inspires and drives me daily to advocate for patients and their right to have the best treatment possible.”

Be a champion of hope, inspiration and action like Loretta by registering for a PurpleStride or checking out our new do-it-yourself fundraising platform Wage Hope My Way.