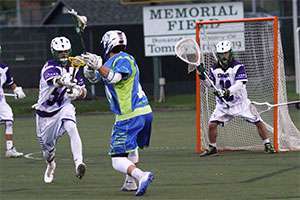 Two rival teams in Emmaus, Penn., squared off in support of different charities. Emmaus High School’s senior goalie had the idea as a way to honor his dad, a pancreatic cancer survivor.

On April 29, 2016, in Emmaus, Penn., two rival high schools took to the field for a lacrosse match like no other.

This game was special, unlike any before it, because Southern Lehigh and Emamus high schools hosted a “Cancer Awareness Night” and each team had selected a different charity to support.

Emmaus High School chose to play on behalf of the Pancreatic Cancer Action Network, due to the team’s many unfortunate connections with the disease. One of those connections was tied to the senior goalie, Kevin McGee. His father, Jerry McGee, was diagnosed with pancreatic cancer in 2011. Since the diagnosis, Jerry underwent one round of chemotherapy as part of a clinical trial, had the Whipple surgery and later underwent another round of treatment. Today Jerry and his family know all too well how lucky they are and how devastating this disease is. 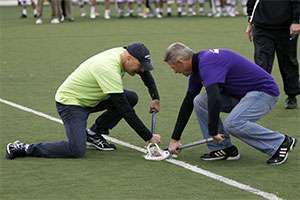 Two cancer survivors (Jerry McGee is on the right) were honored before the match started.

During his father’s battle, Kevin often educated friends at school about pancreatic cancer and the effect it had on families. Kevin said that once everyone realized how life threatening this kind of cancer could be, everyone rallied together. They all wanted to sell out the game and make the night a success. Kevin’s mother, Elizabeth McGee, agreed with this and said that it was the high school kids who took ownership of the event, selling T-shirts and tickets.  Soon everyone was doing anything and everything they could to get involved. Kevin said that people were even volunteering to sing the national anthem at the game and asking their work locations to donate gift cards for prizes. It was a team effort on and off the field.

After much time spent fundraising and creating awareness off the field, game day finally arrived. It started with a ceremonial faceoff in the middle of the field between Jerry and another survivor from Southern Lehigh’s charity – a player’s father, who is in remission from non-Hodgkin lymphoma. This was the students’ way to honor and recognize everything the two men had gone through in order to be there that night. This truly touched Jerry. He simply could not believe the number of people who came out and supported him and the Pancreatic Cancer Action Network. 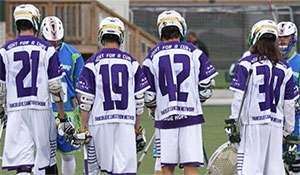 Although Kevin recently graduated and won’t be playing in next year’s game, he believes this event was the perfect way to encourage kids his age to get involved with the community and make a difference in the lives of others.  He mentioned how hard it was to raise awareness about pancreatic cancer, but said using sports makes it easier and enjoyable for everyone involved.

Reflecting back on that special lacrosse game, he said, “There is a lot of emotion in every game, but so much more emotion in that game knowing that you are playing for something bigger. It felt good knowing that it didn’t matter if you won or lost the game.”

Interested in hosting an athletic event for the cause? Learn more about our Wage Hope My Way do-it-yourself fundraising program, and get started today!