Since high school, Barbara Geraghty had an interest in serving in the military and in serving others. 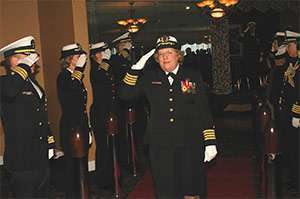 Barbara Geraghty, PurpleStride Chair for the Tidewater (Va.) Affiliate, uses her 27 years of experience in the Navy to lead in her community.

So when it came time to go to college, Barbara’s dad, Roger, advised her to get her education and also become a commissioned officer. After visiting both the U.S. Naval Academy and the U.S. Air Force Academy, she applied to the Naval Academy for college and a five-year term of service.

“The discipline and structure appealed to me, as well as the opportunity to serve my country. My dad had served a four-year enlistment in the Navy and spoke favorably about his experience,” Barbara said.

On July 6, 1976, she was sworn in as a Midshipman at the Naval Academy in the first class to graduate women. She was commissioned in 1980 and served 27 years before retiring as a Navy Captain. 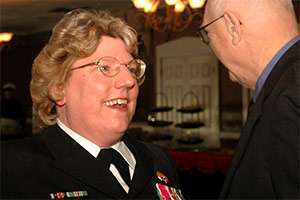 Barbara’s dad, Roger, is her inspiration and motivation to Wage Hope.

When her dad passed away of pancreatic cancer in 2010, Barbara knew she wanted to honor his memory by being of service to others.

And she does that through her volunteerism with the Pancreatic Cancer Action Network in Virginia.

“The Navy taught me to be a leader, to pursue excellence and problem-solve. I learned how to lead goal-focused teams. The Navy also gave me plenty of opportunities to speak in public, which has been helpful in representing the Pancreatic Cancer Action Network in the media and on Capitol Hill at Advocacy Day.”

Barbara was ready to take her leadership skills to the forefront and lead the Tidewater Affiliate in hosting their first PurpleStride in 2014 – the event was a huge success. 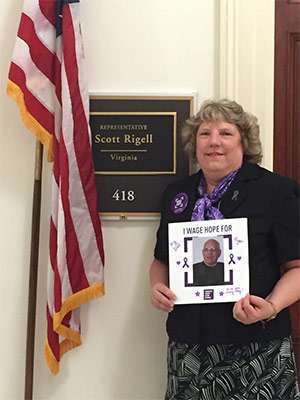 Barbara outside her Congressman’s office at Advocacy Day 2015.

“The Tidewater community was looking to celebrate and honor their loved ones. My volunteer committee had never planned a 5K event before and we were all proud of the job we had done.”

As a PurpleStride Chair and Volunteer Advisory Council member, Barbara brings to life the commitment to helping others that her parents instilled in her.

“My parents set the example for my family with their work ethic and commitment to volunteering. I enjoy having a positive impact, and volunteering feeds my soul. Plus, the two things I miss most about the Navy are working with people and serving a bigger purpose. Volunteering fills that void for me.”

Wage Hope like Barbara by participating in your local PurpleStride!