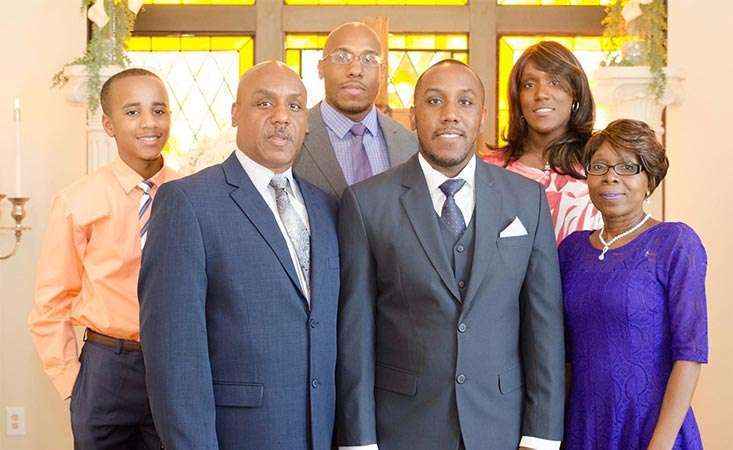 Raymond Penn volunteers in Florida on behalf of his late wife.

“This is going to be rough,” Raymond Penn said after a deep sigh, “but I tell my story to everybody.”

Penn lost his wife, Laura, to pancreatic cancer less than a year ago. He’s been telling his story ever since.

They met when they were just 13 years old. “From the first day I met her, we started a conversation. Every time we were together, we would just talk.” They spent the next 44 years talking – about their children (a daughter and two sons), their grandchild, their love and their shared passion for helping others.

Penn, a Navy veteran, and Laura spent their free time supporting causes that affected their friends and loved ones. They participated in annual charity walks for breast cancer, colon cancer and autism awareness. Laura, a seamstress since her teen years, would make shirts for her walking teams and blankets and pillows for those going through cancer treatment.

It was at a walk for breast cancer that Penn remarked how yellow Laura’s eyes were. At the doctor’s office that following Monday, they were told that Laura had pancreatic cancer and would need a Whipple procedure.

The doctor also said to stay off the internet, a rule Penn immediately broke.

“I told them what was going on, and they sent me a package in the mail. It had a booklet in it and a bunch of information about pancreatic cancer. They were great.” He also learned about PanCAN’s PurpleStride walk/run events. “We took off from there,” said Penn.

After two unsuccessful Whipple procedure attempts, Laura implemented supportive (palliative) care approaches. “That’s when PanCAN Patient Services suggested some clinical trials…they gave us a bunch of options for different trials that she might be eligible for, but she had to finish her chemo treatments.” 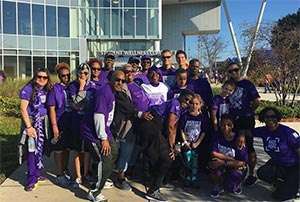 Team Laura at the 2018 PurpleStride in Jacksonville, FL

Knowing how helpful and supportive the environment is at charity walks, Penn and Laura signed up for their local PurpleStride event. “Everyone was so happy. Laura was able to get up (on stage) and tell everyone that she was a survivor.”

Their first year, Team Laura raised $2,500 – five times their fundraising goal. Their second year, they raised $3,000. And while Laura won’t physically be there for Jacksonville’s PurpleStride on Oct. 26, her spirit and story will be.

Before she passed away, Laura made Penn promise that he would continue with the work they started together. He now serves as the Jacksonville affiliate outreach chair and a PurpleStride team captain. Spreading awareness about the disease is his life’s passion.

“She made me promise and that’s what I do now. I’m living for the promise.”

Penn will tell his story anywhere. While waiting for a flight at the airport recently, a woman asked about the PurpleStride band he wears around his wrist. “I started to tell her my story, and we started crying together. Then everyone around us started listening and crying. It just makes me want to tell more and more people.”

Talking to others has helped Penn through the grieving process, and he is grateful to PanCAN for the opportunity. But, in his ideal world, he’d be carrying on the conversation he started more than 44 years ago with his best friend.

Toward the end of her life, when the disease robbed them of their most cherished pastime because she was too weak to converse, Laura would squeeze Penn’s hand to say she loved him and encourage him to keep talking.

Penn says that Laura would be very happy to see what he’s done. “That’s my saying, ‘I’d love to prevent just one person, one family, from feeling the pain I’ve been feeling every day since Laura lost her battle against this deadly disease.’”