Why I’m involved with the Pancreatic Cancer Action Network.

Pancreatic cancer slammed into our lives and redirected our path painfully and abruptly, as it does in all cases. Gratefully I can say today that for my husband, Stu, pancreatic cancer has been a diagnosis, not a death sentence. 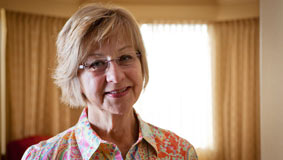 Stu’s cancer was discovered by accident as a result of a painful emergency room visit for kidney stones. During the ER testing, it was noted that his blood test results showed extremely abnormal readings, and he was advised to follow through with more tests to discover the cause. Many tests and weeks later, in December 2008, Stu was diagnosed with pancreatic cancer.

The Whipple was attempted in January, but upon opening him up, the surgeon found metastatic lesions on Stu’s liver and lymph nodes also. The Whipple was aborted and the surgeon closed him up. Stage IV pancreatic cancer. 6 months of chemotherapy clinical trials at the University of San Francisco started in February. The battle for Stu’s life became his work, his job, his profession. He mustered strength from within, from God, the medical teams, and from wonderful family and friends.

Fortunately he tolerated the chemo infusions and oral medications fairly well, with some moderate side effects. During this time, we both made the intentional decision the live the journey, however it might be- horrific, inspirational, discouraging, the good and the bad-- in a public way. Stu consciously determined that he was NOT going to give in or give up and retire to his lounge chair, one day at a time, for as long as he was able. If the cancer were to get him, then it would only be after a furious daily WAR! We reached out to all our family and friends in various ways- including regular updates and requests for support and prayer on my on-going CaringBridge website.

Surprisingly, amazingly, the chemo worked well; the lesions shrunk. Stu was given a second chance at the Whipple in October 2009. During the second surgery, the expected adeno-carcinoma was found in the pancreas’ head, but the surprise discovery of neuroendocrine carcinoma in the islet cells meant the entire pancreas would have to be removed. The pancreas was taken; and Stu was alive, cancer-free, and a type 1 diabetic. As of his last scan in late June 2011, miraculously, there is no sign of pancreatic cancer.

As for me, there’s a new purpose in my life. I’m driven to raise awareness of pancreatic cancer towards its eradication. So, the Pancreatic Cancer Action Network’s multi-faceted organized approach to working with patients and caregivers, advocacy, and fundraising for research, offers me a way to redeem the insanity of the past few years and help to turn the tide.

I find myself telling Stu’s story and the stories of others who aren’t so “lucky” at any and all venues: at Caregivers support group meetings, at City and County Council Meetings while obtaining Proclamations, in gondolas on the way to the top of the mountain at ski resorts, to strangers we meet on vacation or in the supermarket. Together we are all working to raise general awareness of pancreatic cancer, and to increase funding for research to find the means of early detection and eventually eradicate the disease. One day for all those who get the news they have pancreatic cancer, it will simply be a diagnosis for a treatable disease and not a death sentence.