In 2003, I was a healthy happy 38-year-old married mom of two (a 10-year-old daughter and a 6-year-old son). After experiencing cold symptoms then, I became jaundiced and three stents later, after exploratory surgery, I was told the unthinkable. The doctor came in my room the day after the surgery and said to get my affairs in order.  The physician told me I had pancreatic cancer and that I only had two years to live. Well, I didn’t know what hit me. 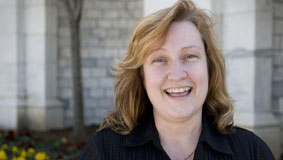 Ten days in the hospital, then back home knowing that I would have to go through chemotherapy and radiation after 4 weeks of recovery. After getting home and doing some research, I  found out that all the information was just negative regarding what was available to me. I took a rest for two years, focusing more on my recovery rather than the bleak outlook on my life. I tried my search again and found the Pancreatic Cancer Action Network and other survivors.

I figured there must be a reason why I was still alive, so I decided to become involved with the Pancreatic Cancer Action Network and their Survivor and Caregiver Network, which is part of their PanCAN Patient Services I wanted to offer hope and confidence to patients, caregivers and survivors, so they didn’t have to go through it alone. Eight years later, I am still here and doing just fine. There is much more we have to do and I will continue to be here to make a difference.

The first time we went to Washington, DC for Advocacy Day, it was a great experience. Every year since then, we have continued to grow in numbers. The difference we have made so far is great, but much more needs to be done and this is the reason I do not stop and sit back. I hope to be a light in someone else’s fight with this disease and give some comfort to those who have to take care of one stricken by this type of cancer.

The 5-year survival rate is still in the single digits at just 6%. I would love to see that percentage move up there with the survival rate for breast cancer. So as long as I can, I will not stop fighting.