This is not about me. It’s about my daughter Kristen, and, my husband, her dad, Ken. In January 2006 I was diagnosed with breast cancer. During my treatment, Kristen felt the need to “do something constructive” so she joined the American Cancer Society’s Relay For Life. In 2007, as I celebrated my 1 year survivorship, my husband Ken was diagnosed with Stage IV pancreatic cancer. 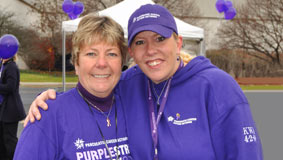 This made Kristen’s resolve even stronger to fight cancer! During the course of 3 years, Kristen was responsible for raising $35,000 for the American Cancer Society’s Relay For Life to fight all types of cancers. In doing some research, my daughter discovered that funding in general was sparse for pancreatic cancer in comparison with other leading cancers such as breast, lung, colon, etc. In fact, funding for pancreatic cancer research from the National Cancer Institute (NCI) accounted for less than 2%! My husband lost his battle almost 1 year to the day of his diagnosis- April 2, 2008. Kristen promised her dad that she would continue his battle. When she realized the minimal amount of funds that were allocated for pancreatic cancer research, she decided to join the Pancreatic Cancer Action Network and direct her energy there! After all, I am alive today, as a DIRECT result of what research can do-SAVE LIVES! So, she started organizing the 1st PurpleStride in our area- PurpleStride Danbury09! Her goal was $50,000! We thought she was crazy to have such a huge goal but she quickly proved us all wrong. She even adjusted her goal 5 days before the event to hit $75,000 by December 1st.  As of this writing, mid November, her event has raised nearly $79,000! Her dad’s motto was always “Go Big or Go Home” and she has lived by this since organizing this walk a year ago. I am a very proud parent of a Pancreatic Cancer Action Network volunteer! I hope the Pancreatic Cancer Action Network realizes the wonderful woman they have on their side!