I am writing in memory of my brother, Don Bertoli. He was diagnosed with pancreatic cancer on March 1, 2004. It was stage IV, the doctors said he could try chemo but it might not increase his life expectancy of 6 months. He opted for quality over quantity and passed away 6 very short weeks later on April 7, 2004. 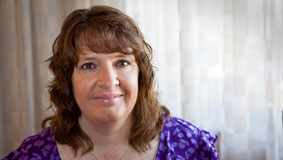 He had had pain in his stomach and abdomen for several months, but thought that changing his diet was helping. (He ate jalapenos and green chilies almost every day.) One day, he woke up jaundiced and called his doctor. His doctor said he needed to have his gallbladder removed and to check himself into the hospital so they could schedule the surgery. They did some tests and saw something on his gallbladder and said they would check it out in surgery.

When he went in to have it removed, the doctor came out after surgery and told us he had pancreatic cancer. We were devastated. The doctor also said it was the worst tumor she had ever seen. It was everywhere and every internal organ was affected. I guess you could say he was lucky though; he went so quickly he didn’t go through the months of suffering like so many people do with this horrible disease.

I stumbled upon Pancreatic Cancer Action Network one day the following November. I went to a Taco Bell and on the counter, there was a can with “Pennies for PanCan” on it. I made my donation and took down the information. I then decided I was going to do whatever I could to help make a difference. I wanted to help find early detection, and a cure so no one else has to lose a loved one to this awful disease.

I lived in Colorado at the time and kept asking to get involved in Colorado Springs. We started an affiliate in 2008 and I was the Affiliate Coordinator there. I moved to Tucson in 2010 and I am now a Community Representative. I feel I am making a difference by holding meetings with other volunteers, educating and advocating for pancreatic cancer. I know someday, and hopefully sooner rather than later, we will find a cure for this disease.