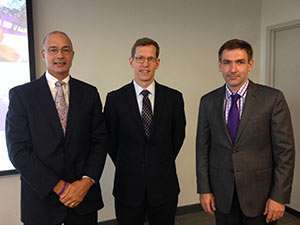 On the morning of November 1, Philadelphians will unite for PurpleStride Philadelphia 2014 presented by Thomas Jefferson University Hospitals. The event is expected to draw more than 5,500 participants and raise $765,000 for the fight against pancreatic cancer.

In the middle of the hustle and preparations for this large event are three major cancer institutions: Thomas Jefferson University Hospitals, Fox Chase Cancer Center (Temple University Health Systems) and Abramson Cancer Center (University of Pennsylvania). These three institutions are making major contributions to the success of the event through their involvement with the Honorary Chair Program, which aims to engage institutional leaders with PurpleStride events in various ways, such as forming teams, sponsoring the event, being guest speakers and asking other leaders in the community to join the awareness and fundraising efforts.

Each of this year’s honorary chairs has been involved with PurpleStride Philadelphia in the past and is eagerly anticipating the 2014 event. When asked what they were looking forward to the most this time around, all three honorary chairs gave the same response: a jolt of energy! For all three, PurpleStride provides the fuel they need to go back to their labs, offices and operating rooms and fight even harder against pancreatic cancer.

“Those of us who are involved on a day-to-day basis in the care of patients with pancreatic cancer become energized by the event,” said Honorary Chair Charles Yeo, MD, FACS, who is the Samuel D. Gross Professor and Chair of the Department of Surgery at Thomas Jefferson University Hospitals.

“Every time I’ve been at PurpleStride, I’ve had individuals come up to me to share their experiences, talk about their treatment at Jefferson and talk about their loved ones,” he continued, recognizing that participants love to connect with their doctors and see their involvement in the community. 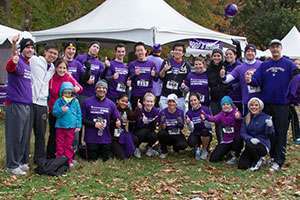 The Thomas Jefferson University Hospitals team at PurpleStride Philadelphia 2012. Dr. Yeo is in the second row at the far right; Dr. Brody is kneeling in the first row, where he is second from the left.

Honorary Chair Igor Astsaturov, MD, PhD, is a gastrointestinal oncologist at Fox Chase Cancer Center. In 2012, Dr. Astsaturov’s wife was diagnosed with pancreatic cancer, and in March 2013, she passed away. While his personal connection to the disease is surely enough to motivate him, he speaks passionately about the powerful impact PurpleStride events have had on him. “I leave feeling more energetic, more motivated, more angry, more determined to fight,” he said.

Dr. Astsaturov is looking forward to PurpleStride 2014 to reinvigorate him and push him the extra mile in his work. “I’d like to see new faces, more patients who are fighting and more volunteers and families standing shoulder to shoulder, not letting that energy subside.”

To Dr. Astsaturov, it is events like PurpleStride, and the community they unite, that “create the energy that is needed to make a difference.”

“We are committed to increasing awareness about pancreatic cancer, capitalizing on all the new research findings to help develop new therapies and, most of all, joining the movement to say ‘we can and must do even more for our patients,’” said Dr. Vonderheide.

Dr. Vonderheide and his lab are joining the movement for the second year in a row with a team at PurpleStride, and he is looking forward to being inspired by hearing participant stories once more. “For a cancer researcher,” he said, “PurpleStride shows that there is a powerful community behind us as we work toward finding a cure.” 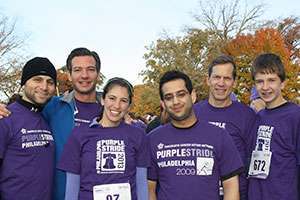 Dr. Vonderheide (second from right) and his son (far right) and fellow members of Abramson Cancer Center at PurpleStride Philadelphia 2013.

One of those grantees is Jonathan Brody, PhD, recipient of the 2010 Skip Viragh – Pancreatic Cancer Action Network – AACR Career Development Award. Dr. Brody is a Co-Director of the Jefferson Pancreatic, Biliary, and Related Cancer Center at Thomas Jefferson University. He has been part of PurpleStride Philadelphia for the last eight years and has made a point of attending the event even when his schedule is tight.

“I realize that this event has an energy and a spirit that are truly infectious,” Dr. Brody observed. “For researchers and physicians, the event symbolizes the spirit of the pancreatic cancer community. The folks in the lab need to see what they are working toward, and the event puts a real, human face to the foe we are trying to tackle in the laboratory.”

PurpleStride gives researchers, doctors, surgeons and the entire medical field a chance to trade their lab coats for running shoes and unite to deliver hope to those who need it most.

“We are all in the fight together. This is the disease that has to be beat with all available resources,” said Dr. Astsaturov.

And from Dr. Vonderheide: “The word is spread one person at a time; hope builds one patient at a time.”

One at a time, yes. But three committed institutions, three dedicated honorary chairs and all those they inspire to join them multiply that awareness and that hope many times over.

Stay tuned for more stories about researchers and healthcare professionals getting involved with their local PurpleStride event. And if you know of or work for an institution that might be interested in supporting a local PurpleStride, please reach out to corporaterelations@pancan.org or 1-877-272-6226.

Editor’s note: This is the fourth article in an occasional series highlighting pancreatic cancer healthcare professionals, researchers and local institutions that enthusiastically support their community’s PurpleStride run/walk events. You can read previous articles in the series in the May, July and August issues of Pancreas Matters.