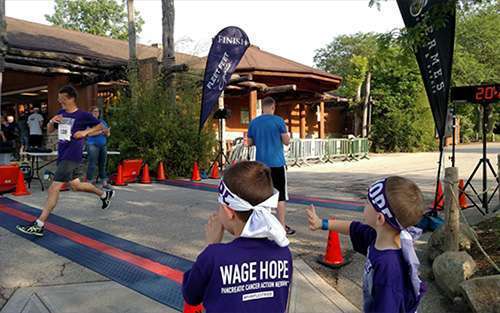 Kevin Denee recalls his inspiring experience attending PurpleStride Cleveland. He recounts how it felt to be among scores of supporters rallying to create change for one of the deadliest cancers.

I had the wonderful opportunity to Wage Hope at the Pancreatic Cancer Action Network’s PurpleStride event at the Cleveland Zoo on June 10. It was an incredibly special and emotional event, and one that touched me deeply. I was honored to be able to join so many awesome people and raise awareness for such a great cause.

In 2003, I lost my father way too early to pancreatic cancer. I have also lost my “opa” (grandfather) and my uncle to the disease. 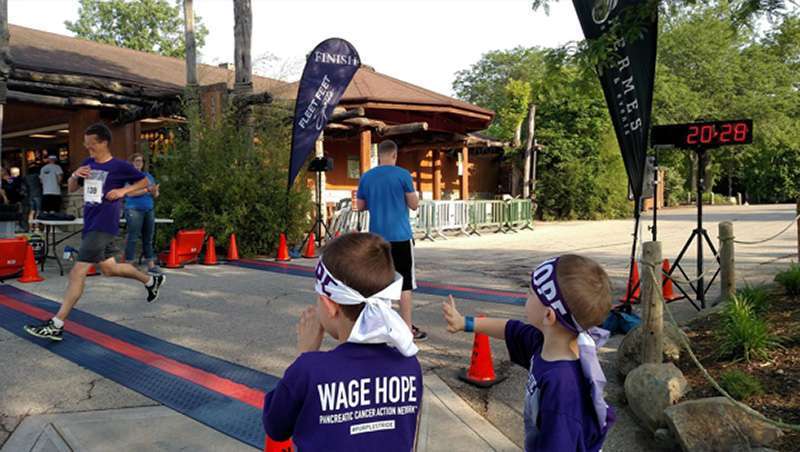 As I ran the 5K, I pushed hard. I told myself that any pain I was feeling could never compare to the pain my father felt on the day he died. The Cleveland Zoo is a very hilly course. Before the race, I didn’t have any finite goals. However, this race obviously meant a lot to me. I was thrilled that I got a personal best time, finishing at 20:28.

A little later, an even larger group participated in the 1 mile walk/run. My wife, sons and I had the privilege to join this sea of purple.

This was my first fundraiser. I asked my friends and family to give to this worthwhile cause, and I was so encouraged by those who chose to give. My heart swelled each time I saw a donation come through. I was thankful to be able to exceed my fundraising goal.

Thank you to all who gave. It means more than you can possibly know.

At a point during the ceremony, they asked all the survivors to come forward. What struck me is that there were not nearly enough survivors for the crowd that we had. A striking reason why we had all gathered together for this event.

They asked each survivor to tell their name and the number of years (or months) they had survived. All the numbers were too low. 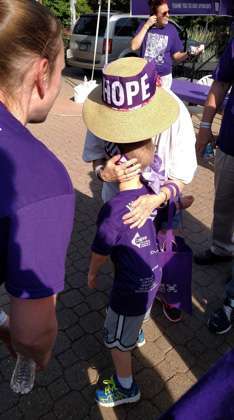 The last woman who spoke said, as her voice cracked, that she just learned she had pancreatic cancer. Eyes welled up quickly. My six-year old immediately heard what was going on, asked a couple questions, and then went over to hug this sweet lady.

At a point near the end of the event, I determined I was going to offer my support to every survivor I could find. Once again, I pushed myself and I am incredibly thankful I did. Hugs, handshakes and high fives with an extra squeeze telling them we are standing with them. I will not forget their voices – a mixture of hope and hopelessness, positivity and pain.

One survivor said he counts every day. That struck me.

Count every day. Shouldn’t we all be doing that? Why does it take tragedies such as cancer to help us come to this basic realization that every day is a gift?

This event was a life-changer. From sadness comes strength. From heaviness comes hope.

Curious about how PurpleStride can inspire you? Look to see when an event is happening in your area!