Life Is Back to Normal for 5-Year Stage IV Survivor 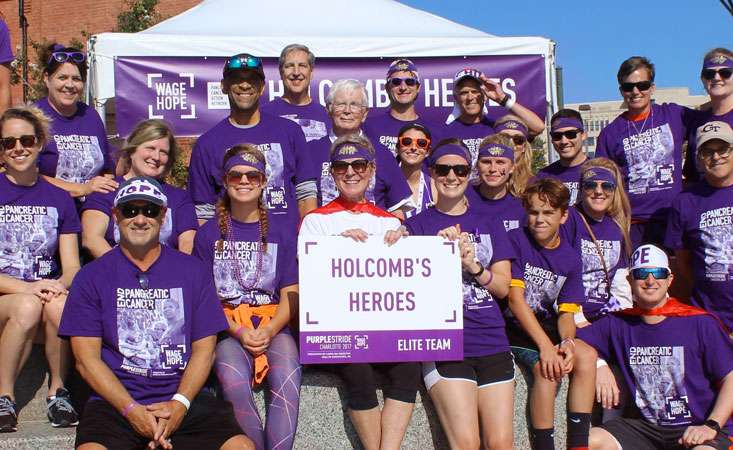 The Holcomb's Heroes team supports Lynne at a past PurpleStride event.

“Life is basically back to normal.”

In December 2015, 55-year-old Lynne was participating in one of her favorite activities – a tailgate party before the Clemson University football game. 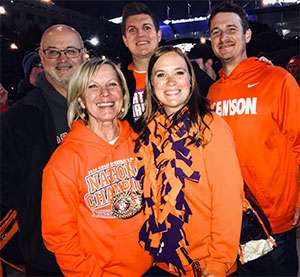 Lynne and her family are big fans of the Clemson University football team.

But she never made it to the game that day.

“My daughter took one look at me and said, ‘Mom, you look yellow!'”

Lynne’s daughter grabbed some of her friends who were medical students. They agreed that Lynne looked jaundiced and needed medical attention right away, so she headed for the emergency room.

After some scans and other tests, a doctor and nurse entered Lynne’s hospital room and shut the door. They stood far away from her, backs against the wall. Then they told her they had found tumors on her pancreas and liver – stage IV pancreatic cancer.

Lynne ended up hospitalized for five days and lost about 20 pounds. She welcomed the new year by starting chemotherapy. After eight months, her disease was stable, and her tumors had gotten smaller.

“I was grateful to handle the side effects really well,” Lynne said. “I had been a personal trainer for 25 years, taught kickboxing classes and was in really healthy shape before my diagnosis.”

But then something changed. “My neuropathy got really bad,” Lynne recalled. This condition can cause severe numbness, tingling or burning of the hands and feet. “My doctor recommended switching to a different chemotherapy regimen before it became permanent.”

Lynne’s oncologist mentioned a clinical trial opening soon at the cancer center. Lynne enrolled as soon as she was able. 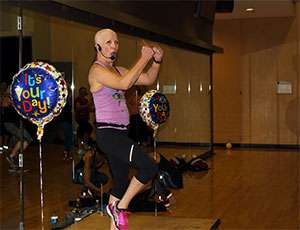 Lynne teaches a kickboxing class after her pancreatic cancer diagnosis.

The early-phase clinical trial evaluated a combination of experimental immunotherapy drugs. Lynne participated for nearly a year, until February 2018. She’s had no evidence of disease ever since.

“Clinical trials are hope. They’re science. They’re cutting-edge science – and that’s how I want to be treated,” Lynne said.

She thinks all pancreatic cancer patients should be treated based on the most cutting-edge scientific and clinical evidence.

When Lynne speaks with fellow survivors, she makes sure to tell them about PanCAN’s Patient Services, as well as PurpleStride and other opportunities to get involved in their communities through PanCAN.

“Everyone I’ve met through PanCAN is so real,” Lynne said. “Their hearts are in the cause, and that’s so important to me.”

Contact PanCAN’s Patient Services for a personalized clinical trials search and other information and resources about the disease.