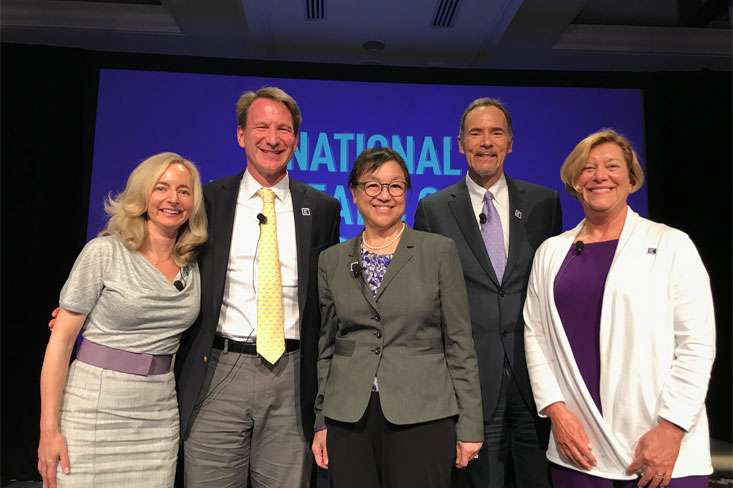 The riveting scientific panel was moderated by Julie Fleshman, JD, MBA, president and CEO of the Pancreatic Cancer Action Network (PanCAN). After Fleshman introduced the esteemed members of the panel, she spent some time asking each person focused questions on their industry’s role toward improving pancreatic cancer patient outcomes. The members of the panel were then eager to answer questions from the audience, comprised of approximately 530 impassioned advocates, representing nearly all 50 states, and including nearly 100 pancreatic cancer survivors.

Included on the panel was Norman “Ned” Sharpless, MD, director of the National Cancer Institute (NCI). As director, Sharpless manages the federal government’s principal agency for cancer research and training, and oversees the execution of NCI’s mission to lead, conduct and support cancer research across the nation to advance scientific knowledge and help all people live longer, healthier lives.

When Sharpless took over the reins of the NCI in October of last year, he embarked on a listening tour to get a sense of the cancer research landscape to help establish his priorities. Sharpless was sure to reach out to PanCAN and set up a meeting with Fleshman and others to learn more about the organization and its incredible advocacy efforts.

Sharpless mentioned that his key priorities for the NCI include training the workforce – ensuring that young investigators can embark on successful cancer research careers. He is also recommitting to basic science by supporting researchers’ investigation of the fundamental characteristics of cancer cells and their interaction with other systems within the body. This knowledge allows the development of more sophisticated early detection strategies and more targeted, effective treatment options. Sharpless prioritizes data aggregation in addition to data sharing, noting that gathering and sharing data are only meaningful if the data can be used to improve patient outcomes. And finally, he will focus on improving the design of smarter clinical trials and increasing enrollment. All these strategies are in direct alignment with PanCAN’s comprehensive approach to fighting and ending pancreatic cancer.

I appreciate the opportunity to speak before @PanCAN volunteers as part of #PANCaware. It’s vital for the research community to engage with advocates and survivors. By exchanging ideas we hope to advance research and find new treatments for patients. https://t.co/jcXddEhgMo

Gloria Petersen, PhD, represented academic research on the panel. Petersen is a professor of epidemiology and holds the Purvis and Roberta Tabor Professorship at Mayo Clinic with joint appointments in medicine and medical genetics. She received an Early Detection Targeted Grant from PanCAN last year and is a longstanding member of the organization’s Scientific and Medical Advisory Board.

Petersen is especially excited about efforts aimed toward improving genetic testing for pancreatic cancer patients, providing insights that can inform treatment decisions as well as benefit family members who may be at an increased risk for the disease.

Insights into the pharmaceutical company perspective were shared by Mace Rothenberg, MD, chief development officer for oncology in Pfizer’s global product development group. Rothenberg is responsible for overseeing clinical research and development activities for all promising oncology products. Prior to joining Pfizer in 2008, Rothenberg spent 25 years in academia where he focused on early-stage drug development, clinical trial design and the coordinated laboratory-clinical evaluation of new therapies for gastrointestinal cancers.

Rothenberg reminisced about his role in getting the chemotherapy gemcitabine approved to treat pancreatic cancer, and how its approval involved both increasing survival and alleviating symptoms experienced by patients. These days, he is excited for pancreatic cancer treatment to move away from chemotherapy and toward more targeted therapies and immunotherapy approaches, aimed to pinpoint and attack the features that make pancreatic cancer cells different from healthy cells in the body.

The final member of the panel was PanCAN’s own chief science officer, Lynn Matrisian, PhD, MBA, speaking on behalf of advocacy groups’ role in supporting pancreatic cancer patients. Prior to joining the organization, Matrisian led a research laboratory dedicated to understanding cancer metastasis. She is a former president of the American Association for Cancer Research (AACR) and served as a special assistant to the director of the NCI.

Matrisian spoke about PanCAN’s efforts to build and strengthen a Community for Progress of researchers dedicated to studying pancreatic cancer. Looking back, she noted, some of the utmost experts in the field today were funded by PanCAN as junior investigators. In addition to providing financial support, PanCAN’s grants bring grantees together to share ideas and information, build collaborations and work together to solve problems from diverse perspectives, expertise and approaches.

Audience members provided emotionally-charged, insightful commentary and questions for the speakers, including calling everyone working on this disease “heroes.” Attendees left feeling educated and inspired to attend meetings on Capitol Hill tomorrow to ensure that our country’s legislators are committed to Demand Better. For Patients. For Survival. For Breakthroughs.

You can have your voice heard tomorrow as well by participating in National Call Congress Day from 9 a.m. to 5 p.m. EDT!