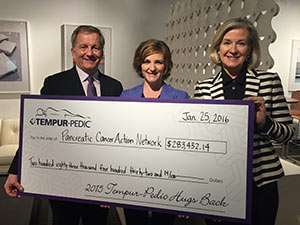 Our vision to double survival is possible, thanks to our generous supporters like Tempur-Pedic®.

Tempur-Pedic, the leading manufacturer, marketer and distributer of premium mattresses and pillows worldwide, has long supported our organization.

When executive Todd Miller first discovered our organization in 2008, he didn’t have a connection to the disease. But, he felt compelled to get involved – and get his company involved – after learning about pancreatic cancer from colleagues on the golf course and reading ‘The Last Lecture’ by Dr. Randy Pausch, a doctor who lost his life to the disease. Years later, it took a deeply personal turn.

In 2011, Todd’s brother, Tim, was diagnosed with pancreatic cancer and lost his battle 14 months later at age 47.

In honor of Tim,Tempur-Pedic pledged in 2013 to fund an inaugural $1 million Research Acceleration Network (RAN) Grant and has been using its Hugs Back platform and Rest Test promotion to fulfill that pledge. Every November, Pancreatic Cancer Awareness Month, Tempur-Pedic makes a $10 donation for every individual who tries out a Tempur-Pedic mattress at its participating authorized retail locations.

In January 2016, Rick Anderson, Executive Vice President and President, North America, Tempur Sealy International and Terry Brophey, Vice President of Integrated Marketing, presented us with the final payment of their latest $1 million pledge – a check for $283,000 from the 2015 Tempur-Pedic Hugs Back campaign.

“We are grateful for the vision of Tempur-Pedic and their conviction in our plan of attack,” said Donna Manross, Director of Strategic Partnerships at Pancreatic Cancer Action Network. “They have been true, long-standing champions in our fight against pancreatic cancer.”

The Corporate Champion has also made an impact through employee giving and engagement, PurpleLight sponsorship and volunteer employee participation in Advocacy Day, underscoring that their hearts are with us in this fight against pancreatic cancer.