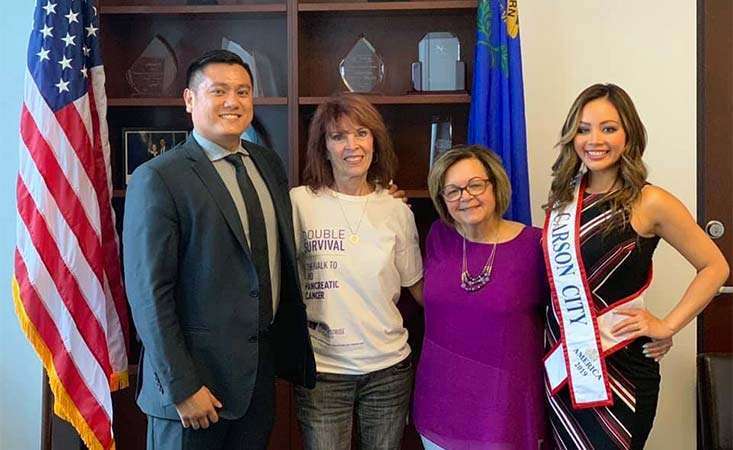 It’s August, which means members of Congress are back at home, and Pancreatic Cancer Action Network (PanCAN) advocates can meet with them in their local district offices.

One such advocate is Nevada Mission Chair Nikki Campagna, who’s been hard at work scheduling meetings with Nevada legislators since early June. She, along with several other PanCAN volunteers, already met with both of their U.S. Senators Jacky Rosen and Catherine Cortez-Masto, and U.S. Representative Susie Lee. Upcoming meetings are scheduled with Representatives Steven Horsford and Dina Titus.

“This has been our best year for in-district meetings!” Campagna said. “I do feel that the new [affiliate] structure and an increase in our volunteer base has been beneficial.”

With more volunteers active in affiliates across the country, PanCAN is able to cover more congressional districts, as members of Congress prioritize requests that come from those they are elected to serve.

While over 600 constituents were in Washington, D.C., in June for National Pancreatic Cancer Advocacy Day, in-district meetings during the August recess allow volunteers to engage with their elected officials at the local level and build relationships with the local staff. They also offer some unique benefits.

“I find the in-district meetings to be very important, because legislators are less rushed and approach things from a local perspective,” Campagna explained. “We actually spent a full hour at Senator Cortez-Masto’s office. It also stimulates further conversation between D.C. and our local areas.”

Campagna and the Nevada Affiliate are already seeing the results of their outreach. The district meetings have provided networking opportunities connecting them to other elected officials.

Campagna is now on Sen. Rosen’s mailing list for health care-related emails and information on awareness events for the affiliate to participate in. They are also well positioned for September, when Congress returns to our nation’s capital and resumes work on the fiscal year 2020 budget.

If they are unable to pass the bills and reach an agreement with the House before the deadline, then it will likely result in a continuing resolution, in which the FY19 budget is extended to give Congress more time to make a deal.

PanCAN’s top legislative priority this year is to secure a dedicated pancreatic cancer research program at the Department of Defense in the FY20 budget. Congress must reach an agreement on the Defense bill for the program to be created.

The organization will need to make a big push in September to get it over the finish line. But volunteers like Campagna have helped to ensure that Congress is keeping the issue top of mind throughout the summer. “It is truly a win-win experience, providing energizing momentum for continued advocacy,” Campagna said.

About August Recess and In-district Meetings

August recess developed as a way for legislators to escape Washington, D.C.’s oppressive heat and humidity during the height of summer. As serving in Congress became a full-time job and members demanded a more predictable legislative calendar, the tradition was officially made law in 1970.

Far from being a summer vacation, August recess is a time when members of Congress reconnect with their constituency, attending fairs, festivals and other local community events, as well as hosting their own town halls or meet-and-greets to hear directly from the people they represent.

August recess may be ending soon, but it’s not too late to get involved! Advocacy requires year-round engagement, and district office staff are always available to meet, even if Congress is in session. If you are interested in attending an in-district meeting or other events in the community, access our toolkit on Volunteer Central.