Donors Give Even More During Pandemic 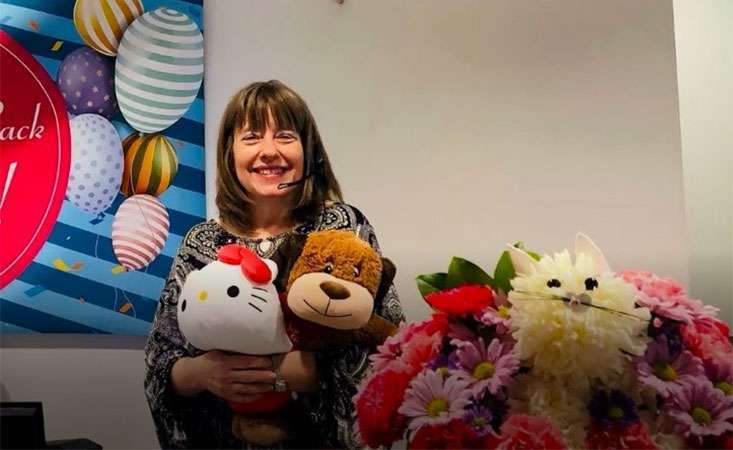 “Do your little bit of good where you are; it’s those little bits of good put together that overwhelm the world.” – Desmond Tutu

The little bits of good that all of you in our PanCAN family are doing are making a big difference in the lives of pancreatic cancer patients.

So much is changing around us every day. Yet you, our faithful donors, remain a constant. In ways large and small, you have stepped forward, asking how you can help even more. We are so grateful.

A few weeks ago, we highlighted PanCAN donors and volunteers who were inspired by the current health crisis to do some extra special things.

That group of generous people has only grown over the weeks. Here are their stories.

Little sister’s courage is her inspiration

Susan Federman and her younger sister, Robin, were best friends. They confided in one another and did everything together, including traveling.

In 2018 Robin was diagnosed with pancreatic cancer. The news was devastating.

Robin fought bravely with her big sister by her side. When biopsies confirmed that her cancer had spread and she was no longer eligible for surgery, Robin decided to return to her work at Jackson Lewis law firm. Susan says the support from her colleagues was key to Robin making it through another six months.

Susan lost her beloved sister in July 2019. The two had lost their father to the disease years before, as well as a cousin. And a good friend of Susan’s lost a friend to pancreatic cancer in March 2019.

Susan gives generously to PanCAN’s Patient Services in honor of Robin but she thinks of the other loved ones she’s lost to this disease.

Since the pandemic, Susan stepped up to make yet another gift. She saw the need to give right now, stating, “…many individual and corporate donations are being directed toward coronavirus needs and other charities aren’t being funded.” She also saw the potential impact on fundraising as a result of PanCAN making their PurpleStride walks virtual since it’s a big shift from historically in-person events.

Susan understood that pancreatic cancer patients continue to fight this disease in the middle of a pandemic and need the support of PanCAN’s Patient Services more than ever today.

Susan’s recent gift honors her sister’s strength and courage. “I am also thanking her friends/co-workers who helped her continue to work throughout her illness as she wanted.”

Susan has also named PanCAN in her will and is now a member of PanCAN’s “Micki Love Society,” made up of a growing group of others who have done the same.

We thank Susan for thinking of pancreatic cancer patients and their loved ones today during this difficult time and well into the future.

Anirban Maitra, MBBS, is a giver by nature. His commitment to ending pancreatic cancer takes many forms. 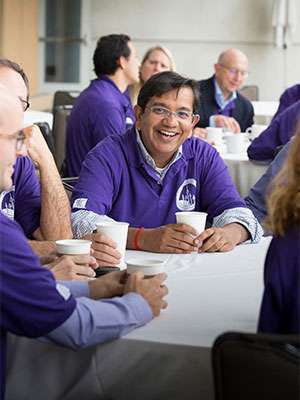 Recently he made a significant gift to PanCAN because, “…even with their large hearts, many Americans are distracted by personal travails and the anxieties of a global pandemic.” And he knows cancer research, cancer advocacy and PanCAN’s Patient Services must continue, especially now. The gift was the honorarium he receives as a member of PanCAN’s Precision Promise Steering Committee.

Dr. Maitra said that giving now seemed “a natural thing to do.”

He’s devoted himself entirely to pancreatic cancer research ever since he received his very first research grant in 2004 – a PanCAN Career Development Award. In 2014 he received an Innovative Grant, funded in memory of Robert Aronson, and he received an Early Detection Targeted Grant in 2017, both PanCAN grants.

Maitra has been part of the PanCAN family for the past 16 years and said, “PanCAN has been very instrumental in my career.”

Maitra encourages us to continue to remember pancreatic cancer patients. “With so much deserved light currently shining on COVID-19, we must not forget that 57,000 Americans each year are still being diagnosed with this cancer.”

He shared that he was thinking of the PanCAN family when he made his gift.

Maitra’s motivation to give is simple: “When you are part of a family, you do whatever you can to chip in. And I have always considered PanCAN family.”

Like so many others, Naomi Yoshida, PanCAN volunteer, costume designer and Disney costuming manager, was furloughed in the wake of the coronavirus pandemic.

She didn’t want to sit idly by in the crisis – she wanted to do something.

Naomi understood that pancreatic cancer patients were already dealing with so much. “I imagined the additional isolation and risk of contracting the coronavirus only compounded their situation.” 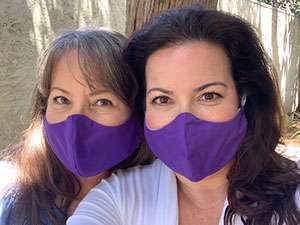 When the PanCAN team had an idea to provide a few purple masks to patients and survivors during the pandemic, Naomi’s daughter Racheal, a PanCAN staffer, reached out to her mom and proposed that she put her costuming skills to use making masks.

“I know how to sew, I have the means to source the materials, and I have experience with organizing volunteer projects for non-profits.  I started immediately – there was no time to lose!” said Naomi.

Once she located a bolt of fabric in PanCAN’s signature purple, she estimated she could make about 1,500 masks.

After choosing a mask pattern, Naomi called on the help of nearly 100 generous volunteers to sew and transport them. Stitchers receive a kit with a pattern, fabric and other essentials to make 12 masks, and a completed mask to serve as an example that is theirs to keep.

Naomi said she feels “humbled and empowered that there is something tangible I can do to help with this battle.”

Daughter Racheal safely drops off the mask kits to volunteers and picks them up when they’re completed. She and Naomi then sterilize and seal the masks in cellophane bags, ready to distribute to pancreatic cancer patients in need.

Said Naomi, “I believe giving is a spiritual law of nature no different than gravity is a law of nature – gifts will return to you, but maybe not in ways you expect.”

We are grateful for all the mask-making volunteers.