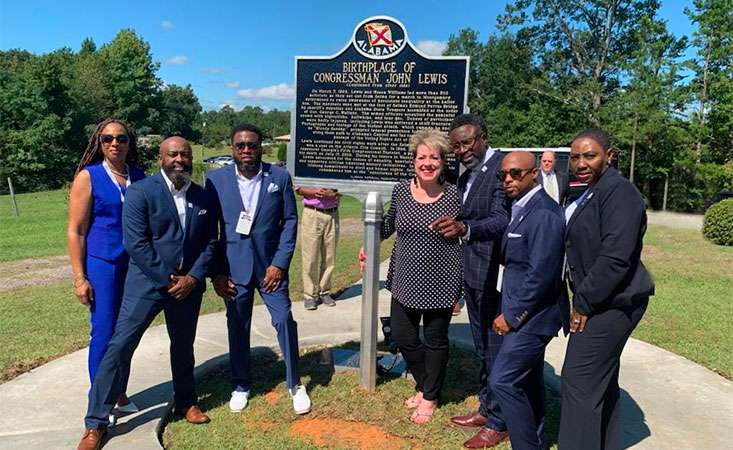 The blue sky was nearly cloudless in Troy, Ala., on Saturday, Aug. 27, 2022. Some 250 people were gathered for a special ceremony to commemorate a new historical marker, placed at the site of U.S. Rep. John R. Lewis’s childhood home.

Among the poetic words spoken during the ceremony were those of 14-year-old advocate Tybre Faw, who said:

“It is such an honor to be here, to be standing in the very place where John Lewis grew up. He was and still is my hero in every sense of the word. He changed me. He inspired me. He challenged me…without saying a word.

I went to Selma in 2018, and I met Congressman John Lewis. It was life changing. I got to shake his hand. I got to thank him. And with his invitation, I led the march to the Edmund Pettus Bridge.

I began to see the world in a whole new way from the moment I met him. I wanted to see my country, put my hands on history, and become involved in whatever I could. That’s hard when you come from a small town in East Tennessee. But the Congressman helped me see that my corner of the world wasn’t enough…

He is part of who I am now.

And now I want to be part of the change.

This today, along with knowing and spending time with the Congressman, has been the honor of my life.” 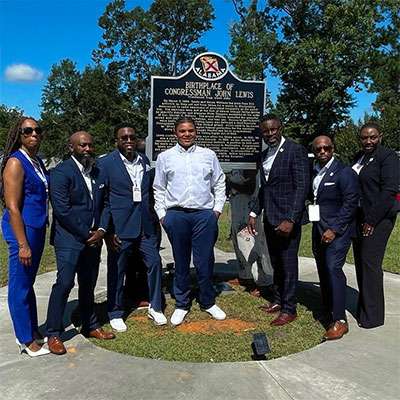 The two met, as Tybre said in his remarks, in 2018 when Tybre went to Selma to walk the Edmund Pettus Bridge, where Rep. Lewis marched for voting rights as a young civil rights icon in 1965.

Tybre was among friends, family and other invited guests, including PanCAN Founder Pam Acosta Marquardt, who attended the marker ceremony.

“We were all gathered on a beautiful, 110-acre rolling hills property,” Pam said. “It was magical to be there and be a part of that historical moment when they unveiled the marker on the property. A truly amazing experience.”

The ceremony and dedication were hosted by the John R. Lewis Legacy Institute, founded by family members in 2021 with a mission to promote diversity, support civil rights education and engage in community service projects that foster his legacy.

An important focus of the Institute is on health awareness and specifically, raising awareness and funds to address pancreatic cancer. Of their work, Rep. Lewis’s cousin Garry Lowe, who serves as vice-chair, said, “We’re locking arms with PanCAN to find better treatments and early detection for pancreatic cancer. The sky is the limit on what we can do together.”

Born February 21,1940, John Lewis was raised on this rural Pike County land by his parents, sharecropper Eddie and Willie May Lewis. In December 1957 while a student at American Baptist College in Nashville, Lewis applied for admission to the all-white Troy State College (now Troy University) but was denied because of segregation. Thereafter, he wrote to Dr. Martin Luther King Jr., who arranged to meet with him in Montgomery. King encouraged Lewis to become more active in the civil rights movement.Returning to Nashville, Lewis graduated from American Baptist and entered Fisk University. As a college student, he organized a series of sit-ins at segregated lunch counters, during which he coined his motto on an activist’s obligation to pursue “good trouble, necessary trouble.” In 1961, Lewis participated in the Freedom Rides challenging segregation at southern bus terminals. Although he endured numerous physic assaults throughout the 1960s, Lewis maintained his belief in the philosophy of nonviolence.

In 1963, Lewis helped found the Student Nonviolent Coordinating Committee (SNCC), the student arm of King’s Southern Christian Leadership Conference. As president of SNCC, Lewis assisted in the planning of the August 28, 1963 March on Washington for Jobs and Freedom and was the youngest speaker at the historic event.

On March 7, 1965, Lewis and Hosea Williams led more than 500 activists as they set out from Selma for a march to Montgomery determined to raise awareness of persistent inequality at the ballot box. The marchers were met at the foot of Selma’s Edmund Pettus Bridge by sheriff’s deputies and Alabama State Troopers assembled at the order of Gov. George C. Wallace. The armed officers assaulted the peaceful crowd with nightsticks, bullwhips and tear gas. Dozens of participants were badly injured, including Lewis who suffered a skull fracture. Photographs and footage of the violent attack, which came to be known as “Bloody Sunday,” prompted federal protection for the marchers along their path to Alabama’s Capitol and led to congressional passage of the Voting Rights Act of 1965.

Lewis continued his civil rights work after the Selma march. In 1981, he won a seat on the Atlanta City Council. In 1986, he was elected to represent Georgia’s Fifth Congressional District, a position he held until his death on July 17, 2020. During his tenure in Washington, Congressman Lewis advocated for the causes of equality, nonviolence and justice and supported African American history initiatives. In recognition of his lifelong commitment to civil and human rights, fellow lawmakers remembered him as the “conscience of the Congress.”

“This was such an incredible moment in history to be a part of,” Pam added about the event. “The Lewis family is so committed to carrying on the legacy of John Lewis to make a difference for others facing pancreatic cancer. On behalf of PanCAN and the pancreatic cancer community, thank you. We’re extremely honored and can’t wait to see what we can accomplish together.”