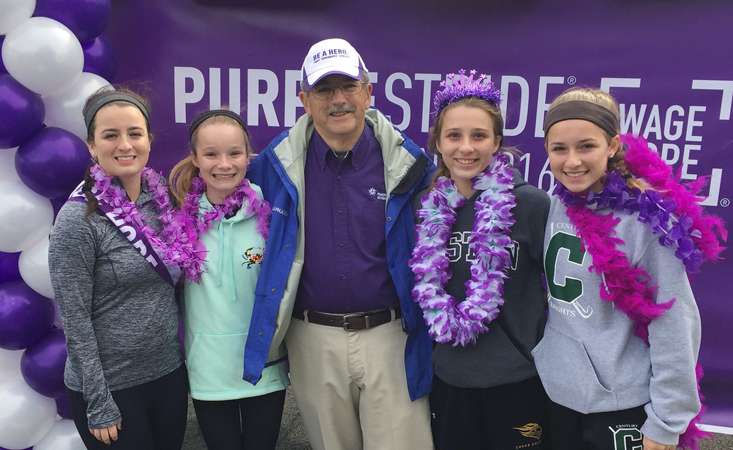 Ken Cunzeman is retiring from his volunteer leadership role with the PanCAN Affiliate in Maryland. He has been involved for 16 years and led PanCAN PurpleStride Maryland (where he is pictured with his granddaughters Kara, Jillian, Jessica and Kaitlyn) to raise over $3 million for PanCAN.

Editor’s note: It’s Volunteer Appreciation Week! A tremendous thank you to all PanCAN volunteers – you are generous, passionate, devoted and unmatched in your commitment to the cause. PanCAN couldn’t exist without you.

Tess Cunzeman was always there for her friends and family. A compassionate ear, a way with words, a kind and caring smile. She was generous. Empathetic, a problem-solver, a longtime Special Olympics volunteer and supporter. Always ready to step up and help.

In October 2006, at a Hyundai car dealership near Tess’s home in Maryland, 122 friends and family gathered to honor her.

“Walk for Tess,” organized by her husband, Ken Cunzeman, raised $24,500 for PanCAN that first year. Tess had died of pancreatic cancer 18 months earlier, on April 11, 2005. The couple had learned of Tess’s diagnosis on Sept. 3, 2004, one day before their 39th wedding anniversary.

At “Walk for Tess,” Ken saw Tess’s spirit in everyone there who stepped up to help in the fight against pancreatic cancer.

Inspired, he got more involved with PanCAN as a volunteer.

He’s not only recruited volunteers to join the fight, he’s encouraged PurpleStride Team Captains to fundraise for PanCAN year after year. Participated in PurpleStride with his children, grandchildren and extended family. Made dear friends.

It’s not only what Tess would have wanted…

“It’s what Tess would have done herself if she had survived,” Ken said. “That’s the kind of person she was.”

“That’s 22,000 people who have gotten together to make some progress happen against pancreatic cancer,” Ken said.

After this year’s event, Ken will step down from his PurpleStride Chair role, handing over the reins to his co-chair, Ebony Watson.

“It’s time,” Ken said. “What started as a family event to honor Tess grew beyond anything we could have dreamed of, and I am so proud of all we were able to accomplish as a team of volunteers.”

Susan Okula is part of the volunteer team in the Maryland Affiliate. She came to “Walk for Tess” and said she won’t forget the sense of relief she felt. She had just lost her husband to pancreatic cancer.

“There was so little recognition of pancreatic cancer at the time and being at the walk helped me see that none of us were alone,” she said.

When Susan started planning the first PanCAN PurpleStride Washington, D.C., in 2009, she turned to Ken for advice. “Walk for Tess” and PurpleStride Maryland had greatly inspired her.

“I consider Ken a silent founder of PurpleStride D.C.,” Susan said. “He was so generous with his time and help. He would tease us and say he knew he was giving away information to the ‘competition.’ He was such a big supporter of our efforts in D.C.

Maryland volunteer and friend Jim Teesdale agrees. Like Ken and Susan, Jim lost his spouse to pancreatic cancer. Ken recruited Jim to serve as the Co-Affiliate Chair with him soon after and they worked together in the role for several years before Jim was the Affiliate Chair on his own. Jim retired from the role in 2020 and had received the national “PanCAN Affiliate Chair of the Year Award” during his tenure (“The affiliate flourished under his leadership,” Ken said about Jim.).

Of Ken, Jim said, “He is so committed…so dedicated to fighting pancreatic cancer. That’s how I would describe the PanCAN volunteer community, and Ken has been an incredible leader. He has built such strong relationships and of course, great friendships.” 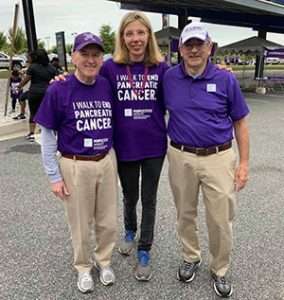 From left, Jim Teesdale, Susan Okula and Ken Cunzeman of the PanCAN Maryland Affiliate of volunteers. They each lost spouses to pancreatic cancer and have devoted years to raising awareness and funds for the cause, determined to help others and change history for pancreatic cancer.

Jim, Susan and Ken said they are grateful to PanCAN for their close bond, and for giving them a way to help others, despite the huge losses they each experienced.

They are also gratified to see that their work on behalf of pancreatic cancer patients is making a difference.

Susan said, “We can see that things are changing. The survival rate has more than doubled, funding for research is increasing, we got a bill passed in Congress to make pancreatic cancer a national priority. It’s been a very satisfying ride.”

Ken doesn’t plan to slow down in his activism, despite retirement. Sure, he said, he hopes to play a little more golf – maybe even make it to Hawaii to play since that’s the only state he hasn’t golfed in. But he is excited to keep giving back to PanCAN.

“Getting involved has been a life-changing experience for me,” he said. “It gave me a way to fight back against the disease that took the most precious person from me.

“The people who come into your life through PanCAN and being able to share experiences with them – it pulls you all together pretty tight. I know that Tess would have loved all of them, too.”

He added, “Seeing the number of survivors at PurpleStride increase every year and seeing the growth of PanCAN and more awareness of the disease, proves that everything we’ve been fighting for all these years is working.”

Julie Fleshman, JD, MBA, PanCAN President and CEO, said of Ken, “I feel so fortunate that Ken has been part of the PanCAN family. The impact that he has made on our community over the last 16 years has been incredible. I continue to be inspired by him and all of the volunteers who are able to turn their grief into action to make a difference.”

Ken said he’s looking forward to PanCAN PurpleStride Maryland on April 30 – it will be One Big Day of celebrating progress, remembering loved ones and reuniting after two years of virtual events. He looks forward to supporting future PurpleStride events, too.

“I can’t see myself not being a volunteer for PanCAN, ever!” he said. “To say I’ve been richly rewarded is an understatement.”