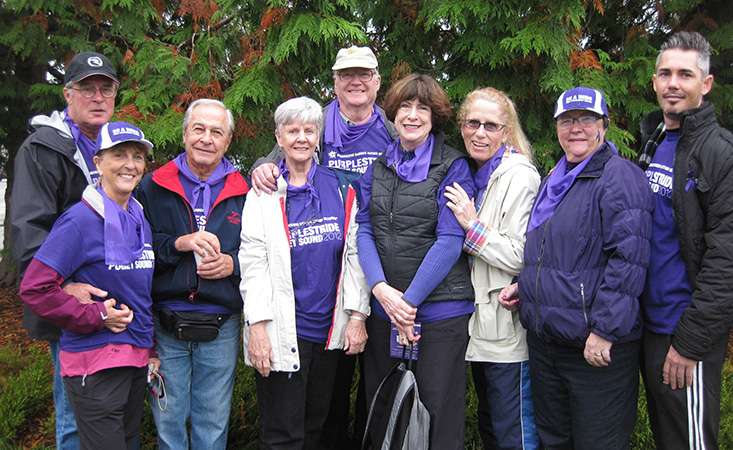 Editor’s note: August is “What Will Be Your Legacy Month.” PanCAN guest contributor Jamie Foltz, a volunteer leader in Columbus, Ohio, recently spoke with donor and volunteer Susan Brown of Seattle to hear why she is leaving a gift to PanCAN in her Will – and how simple the process was.

Traveling the world is something Susan Brown knows well. She’s been to every continent on Earth with plans to return to Antarctica in October of 2021. She and her late husband, Captain Farrell Brown, spent their lives together traveling and exploring unique corners of the world. They were married just short of 32 years, 20 of which they spent living their dream on a 45’ Bayliner.

But traveling isn’t the only thing Susan knows well. She’s made a habit of giving back too. She’s supported PanCAN since 2012, several months before Farrell passed away of pancreatic cancer. She is the Chair of the Puget Sound Affiliate’s PurpleLight event for PanCAN, proudly manages the Wall of Honor at PanCAN’s PurpleStride Puget Sound walk and generally chips in to help the local Affiliate whenever and wherever she can.

And now, she can add member of PanCAN’s Micki Love Society, made up of people who are leaving a gift to PanCAN in their Will, to her impressive list of generous acts. Susan has committed to leaving a portion of her IRA to PanCAN. 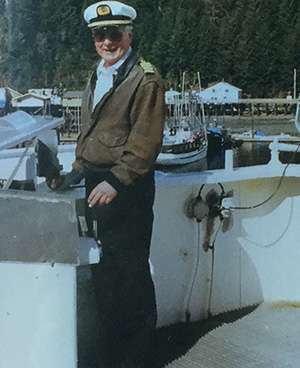 Captain Farrell Brown doing what he loved. Here, at the helm of the Alaska Marine Highway vessel that he captained for 4 years. It’s Susan’s favorite photo of him.

She hopes that one day a major research breakthrough will be the result of her legacy gift.

The process to leave a gift to PanCAN in her Will was simple, Susan said. “I just had to talk to my financial advisor. That’s all. We sat down one day, and I decided how I wanted to break it up. It took less than an hour. It was very painless.”

Upon making the decision, all she needed were a few short sentences in her Will.

“Honoring my husband is very important to me,” she said. “I consistently give in other ways. I just felt that this legacy gift was the final thing I could do.”

Susan and I talked more about our mutual experience in being a part of the PanCAN family. I asked her why she trusted the organization with her time and money. She said something that fully resonated with me. 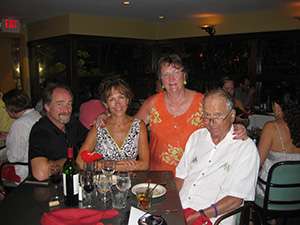 Susan and Farrell with daughter and son-in-law in Hawaii.

“PanCAN just makes me feel like I’m making a difference.”

She was proud to say that the organization has been rated four-stars by Charity Navigator for 17 consecutive years. She knows that there are so many worthwhile causes out there, but just feels that giving to PanCAN will change the outcomes for pancreatic cancer patients in the future.

“Pancreatic cancer makes me very sad, but more so it makes me extremely angry. I was very lucky to have four years with my husband. I sometimes think, ‘how did I get so lucky to have those four years of togetherness?’ I get sad and I get mad at the same time. I’m one of those people who wants to make things better. And I can’t. But I can give money so hopefully other people can make it better.”

There’s no question that Susan feels a tremendous sense of pride in knowing that she can make things better. I could hear it in her voice as we talked.

She told me, “It’s an amazing way to leave a powerful impact. If it’s possible, I highly recommend it because we need all the help we can get.”

She is most definitely right about that. If you’re thinking about remembering PanCAN in your Will, a few short sentences are really all you need. Making a gift-in-will or estate plan takes very little time but can change the future for pancreatic cancer patients and their families. If you’ve already remembered PanCAN in your Will, you can help inspire others by letting PanCAN know of your plans to leave a lasting legacy.

Creating a gift in your Will to PanCAN is a powerful statement in your legacy, and it costs you nothing today. A gift in your Will can advance pancreatic cancer research and support patients and caregivers for years to come, while creating your legacy. If you’re interested in learning more, call us at 310-706-3508 or visit today.

This article written by Jamie Foltz.