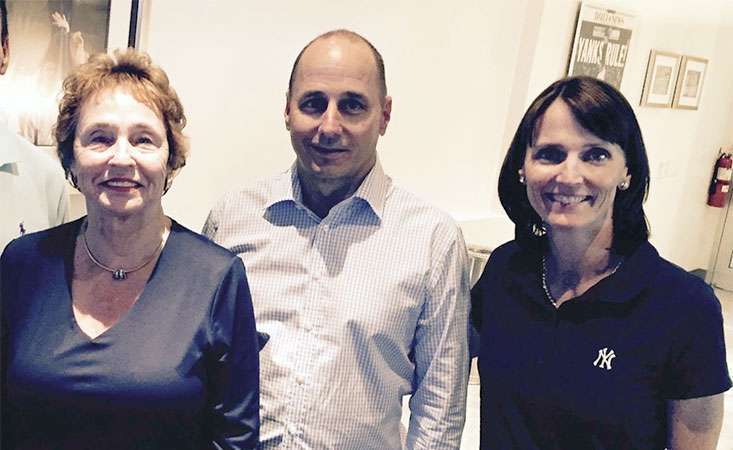 It was a challenging season for major league baseball’s New York Yankees. Despite a star roster, numerous injuries led to doubt that they would make it to the post-season.

“The best laid plans never play out as you hope,” said Yankees General Manager Brian Cashman. “And you have to be prepared to deal with adversity and struggles and adjustments along the way.”

This is the same attitude Cashman has had to take in his personal life, too. He lost his father, John, in 2012, just nine months after he was diagnosed with pancreatic cancer.

His father was a leader in the harness racing industry. He was also a powerful influence in Cashman’s life. It was his father’s connection to Yankees owner George Steinbrenner that led Cashman to the team, where he started as an intern and eventually worked his way up to general manager. He has held this position since 1998. 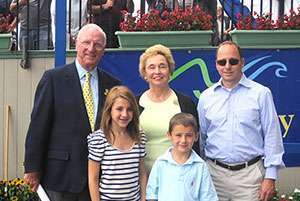 Brian Cashman stands with his children and his late father, John, and his mother, Nancy.

When his father was diagnosed with pancreatic cancer, Yankees President Randy Levine and Major League Baseball Commissioner Bud Selig helped the family find the best treatment options for John. This eventually led them to Daniel Von Hoff, MD, the physician-in-chief and director of translational research at Translational Genomics Research Institute (TGen) in Arizona, who sees many pancreatic cancer patients and oversaw treatment for John.

Following his death, the relationship the family built with Von Hoff resulted in an invitation to Cashman to join TGen’s National Advisory Council, whose members lead a critically needed funding effort and promote a deeper public understanding of pancreatic cancer.

“I welcome the responsibilities and challenges of my role in the fight against pancreatic cancer,” Cashman said when he took on the role. “I’d like to believe I can make the type of contribution my father would be proud of.”

Cashman is not the only one in the family to take a prominent role in the pancreatic cancer fight. His sister, Karen Young, is PwC’s U.S. Pharmaceutical and Life Science Leader and serves on the board of directors of the Pancreatic Cancer Action Network (PanCAN).

Both Cashman and Young see parallels in their business and advocacy roles.

As a member of PanCAN’s board, she is not only able to contribute her skills and expertise in finance, but she also has the opportunity to connect directly with pancreatic cancer advocates.

She‘s attended PanCAN’s National Pancreatic Cancer Advocacy Day in Washington, D.C., where she joined supporters from all 50 states as they met with their congressional representatives to ask for increased federal research funding.

Cashman, meanwhile, draws upon his experiences with the Yankees – especially those gleaned during difficult seasons – to keep the faith and keep fighting on behalf of pancreatic cancer patients and families.

“You have to be very tough, strong and resilient, despite any adversities that come your way,” he said. “I think that would apply to anybody in any walk of business, and anyone dealing with any type of illness or any difficulty.

“Approach life with a great deal of hope. And fight through whatever the problems are at hand. Certainly, hope will at least give you a fighting chance to get through to the other side in a positive way.”