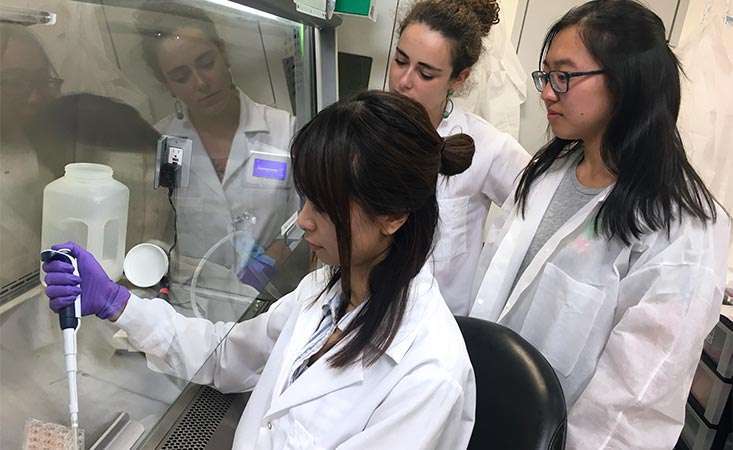 Christine Chio, PhD, (left) works in the laboratory with two of her trainees.

The goal of cancer treatment is to identify – and attack – vulnerabilities that make cancer cells different from healthy cells.

“Our organoid cultures support the growth of both normal and cancer cells and have become an invaluable resource for fundamental and applied studies of pancreatic cancer,” explained Chio, recipient of the 2018 Pancreatic Cancer Action Network (PanCAN) Catalyst Grant, funded by The Ruth and Frank Pratte Foundation. 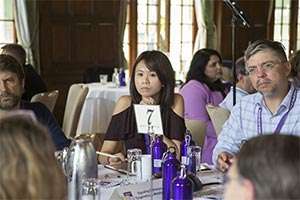 Published recently in the prestigious biomedical journal Nature Communications, Chio and her colleagues describe “a state of hyperactive protein synthesis, or building.”

Specifically, many proteins are built by the cells in pancreatic cancer organoids – but not normal organoids – that regulate a process known as metabolism.

Metabolism refers to the cells’ ability to gather, break down and use energy from various nutrients. Like all living things, pancreatic cancer cells depend on nutrition to survive – and studies have shown they undergo metabolism differently than healthy cells of the pancreas or other parts of the body.

“Pancreatic cancer exists in a state of hyperactive protein synthesis,” Chio said. “We thought if we can stop that process, we might be able to stop the cancer from growing.”

Chio and her team focused their attention on a protein called eIF4A, which is involved in the “translation” of genetic information into the building of new proteins. 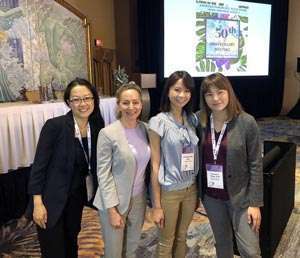 Chio teamed up with collaborators to determine if eIF4A’s activity can be blocked. “We worked with scientists in the labs of Drs. John Porco (Boston University) and Jerry Pelletier (McGill University) to develop a compound, CR-131, to target the protein synthesis driven by eIF4A.”

Encouragingly, they found that treatment with CR-131 shut down two types of metabolism in pancreatic cancer organoids – but not in normal organoids. And the drug caused higher levels of cell death in the cancer organoids.

Testing the compound in mice with pancreatic cancer led to shrinking the tumor, longer survival and minimal side effects. Additional lab studies will be necessary to determine whether the drug can be evaluated through clinical trials in the future.

“With this study, our lab has identified several important mechanisms by which pancreatic cancer grows and divides,” Chio said. “Our hope is that by breaking down the cellular processes that govern pancreatic cancer metabolism, we are able to develop therapeutic options that stop it in its tracks.

“This work is made possible by the generous support of PanCAN and its donors.”