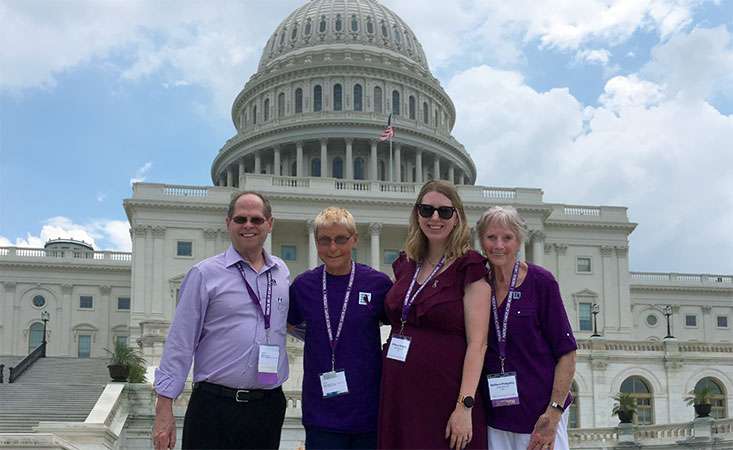 When Richard got the same diagnosis 10 years later, it was beyond belief. Today, Richard is a 10-year pancreatic cancer survivor. And he is determined to do his part to make sure others don’t join the same “exclusive” club, he said – the one he’s a member of, but never wanted to be.

“I can’t tell you how passionate I am about eradicating this terrible disease,” Richard said.

There was no other pancreatic cancer in Richard and Bernard’s family. And despite having genetic testing done multiple times to help determine whether he had a hereditary gene that could lead to pancreatic cancer, it wasn’t until the third time that he went through testing that he learned he had a mutation in the CHEK2 gene, inherited from his father’s side of the family.

The normal function of CHEK2 is to produce a protein that acts as a tumor suppressor – decreasing the likelihood of cancer developing. When mutated, the risk of several cancer types is increased, although CHEK2 mutations are very rare in families with pancreatic cancer. 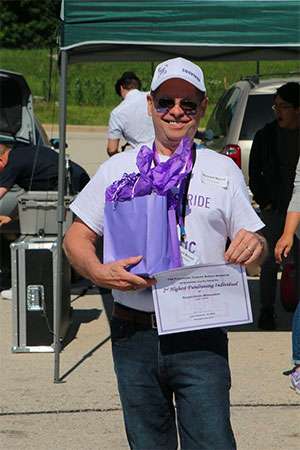 PanCAN strongly recommends that pancreatic cancer patients talk with their doctor to get genetic testing for inherited mutations to help determine if their family members may be at risk and to help the patient make more informed treatment decisions.

The CHEK2 gene can point to an increased risk of developing prostate cancer, and Richard was diagnosed with that disease just six months before he got a pancreatic cancer diagnosis. He was diagnosed with stage 3 pancreatic cancer in September 2012 after a CT scan when he went in for gallbladder surgery. The tumor was in the tail of his pancreas, so surgeons performed a resection of the tail.

“My spleen was totally engulfed with cancer, and I had cancer in nine of the 19 lymph nodes that they removed,” he said.

Chemotherapy and radiation followed. It was a hard battle – he lost 40 pounds and needed 26 blood transfusions throughout the process.

“I tracked him down and told him, ‘You are unbelievable – thank you so much for sharing your story.’”

The gentleman encouraged Richard to get involved with the PanCAN local volunteer affiliate and he did, raising funds to support PanCAN’s mission – including research and free one-on-one support and help for patients and families.

“The more research funding, the more deaths that can be prevented,” he said.

Join us on World Pancreatic Cancer Day, Nov. 17, for our webinar
Research for All of Us: A PanCAN Community Conversation.

He also attended PanCAN Advocacy Day in Washington, D.C., to advocate for more federal research funding for pancreatic cancer. He remains friends with many whom he has met through involvement with PanCAN.

The stories that he hears, and the one he is able to share with others – his own – resonate for Richard.

“Whether we realize it or not, we’re affecting those around us with our every move,” he said. “The more that we can shine a light on the positivity and goodness that there is in our humanity, the better off we’re all going to be.”

Richard leans on his strong faith, and attributes his longevity to a fantastic attitude, good doctors, and God’s grace.

“The reason I’m still on this earth is either He has more work for me to do…or I’m a tenacious SOB,” he said. “I’ve talked to so many pancreatic cancer patients and I try to give them hope. We were all dealt a bad deck of cards and all we can do is to play the hand the best that we can.”

Richard, semi-retired from the computer business, enjoys staying busy – “I’m busier now, in retirement, than ever,” he said. He and his wife of 52 years have two sons. Each day the couple meets in front of the TV to watch “Wheel of Fortune” together.

Then he’s back on the move.