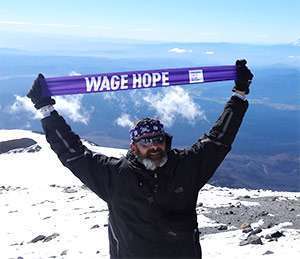 Joe Heiden stands atop Mount Adams in Oregon, at 12,280 feet, to Wage Hope two years after his pancreatic cancer diagnosis.

Joe Heiden has climbed mountains, trained for the “American Ninja Warrior” fitness competition and TV show, been a father to four daughters and recently fulfilled a lifelong dream of purchasing a motorcycle.

He was diagnosed in October 2014 at stage III and was able to beat the cancer with the help of a clinical trial.

“My tumor shrank, and on May 7, 2015, after the doctors at Oregon Health & Science University performed surgery and removed all of the cancer, I was considered cancer-free.” 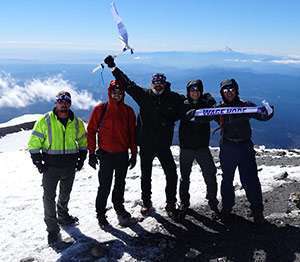 Joe with his nephews and friends summiting Mount Adams.

Joe’s life has been changed by the disease, but he emphasizes that positivity and embracing every moment has helped him – something he wants to pass on to his daughters.

“I’ve always taught them that whatever happens in life, there is something positive in every situation,” Joe said.

When he received his diagnosis, this lesson became even more crucial.

“What was most important to me was to get my children as ready as possible to deal with whatever life brings them. I did everything in my power to find the positive in each moment and showed them that every moment matters.” 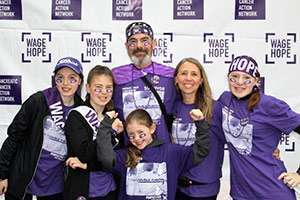 Joe with his wife, Amy, and their four daughters at PurpleStride.

His optimism has not only inspired his family, but his positive outlook and improved physical condition inspired him to climb Mount Adams in September 2016, not too far from his home in Oregon. He climbed over 12,000 feet above sea level with a few of his friends and nephews without knowing what was about to happen to him.

The day after summiting Mount Adams, a CT scan revealed a tumor in Joe’s left lung. It was determined that his pancreatic cancer had metastasized, and the tumor was removed on Oct. 26. 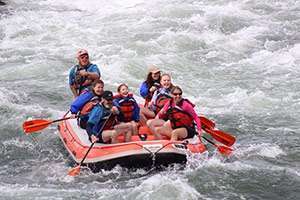 The family whitewater rafting and making life an adventure!

After taking a month off, Joe is back to training for a chance to participate in the fitness competition and TV show, “American Ninja Warrior.” He is more confident than ever that he will succeed, if accepted.

“I’m hopeful I’ll make it onto ‘American Ninja Warrior’ because it looks fun – but just as important, it would be a great way to give other cancer survivors hope,” Joe urged.

On top of all of this, Joe celebrated World Pancreatic Cancer Day 2016 by purchasing a motorcycle, something he has wanted to do since he was young. 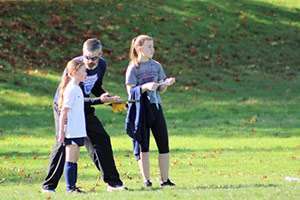 Joe, with two of his daughters, coaching soccer. He has coached girls soccer for 10 years and got back to it this fall.

Joe will continue to defy the odds and the pancreatic cancer statistics by living the way he teaches his daughters to live: Be positive and never lose hope.

“Don’t let this disease make you lose hope. Do what you’re most passionate about,” Joe encouraged.

“And most importantly, focus on all the little positive things you can find in each moment.”

PanCAN Patient Services is here to provide patients and their loved ones with personalized information, resources and hope – including information about clinical trials and other treatment options. Call toll-free 877-412-8735 or email patientservices@pancan.org.