Survivor Gives Voice to His Experience with Tattoos 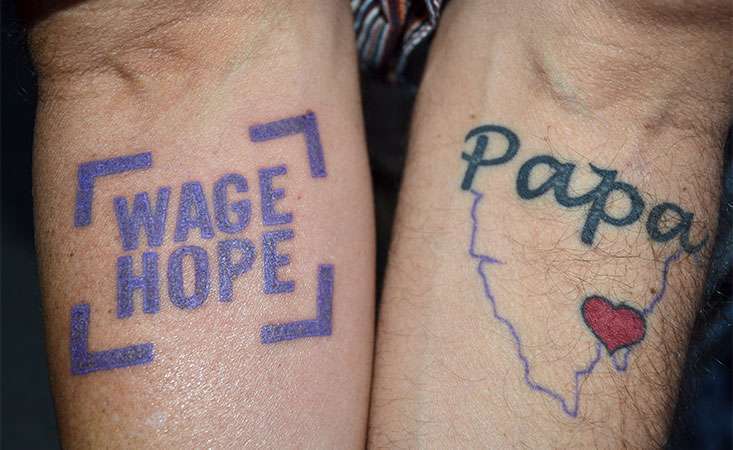 For Franco Juricic, the Wage Hope symbol represents awareness and hope in the fight against pancreatic cancer. The "Papa" tattoo honors the memory of his father.

Editor’s note: Franco Juricic passed away in March 2019 after a second recurrence of pancreatic cancer. His enthusiasm for creating awareness and his dedication for Advocacy has, and will continue to have a lasting impact on the cause. Below is a story about his tattoos. One was a symbol of hope and the other, a way to honor his father who also passed away from the disease.

“Wage Hope is a sentiment that will never go out of style for me – which is good, because I do have a Wage Hope tattoo on my right forearm,” said Franco Juricic, pancreatic cancer survivor and dedicated Pancreatic Cancer Action Network (PanCAN) volunteer.

“I like that it turns a more familiar phrase like waging war – which we even use when talking about the fight against cancer – and turns it upside down. It expresses the genuine positivity of what we’re doing. People see my Wage Hope tattoo and ask me about it. That gives me an opportunity to speak about pancreatic cancer, my experiences and PanCAN.” 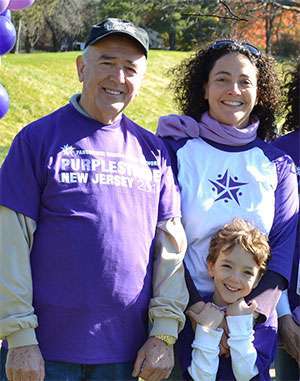 Franco Juricic’s father at PurpleStride New Jersey with family. He passed of pancreatic cancer in 2011.

For many, tattoos can symbolize something near and dear. They can signify loved ones, life philosophies, ideas, struggles, victories, memories and can be therapeutic as well as serve as reminders of motivation and strength.

For Juricic, who also lost his dad to the disease in November 2011, the tattoos on his body not only honor the memory of his father, but they express his personal journey of fighting the disease.

“To permanently display something on my body was a significant decision for me,” Juricic said. “I got my first tattoo at 46, shortly after my dad passed away, a mere seven weeks after his pancreatic cancer diagnosis. It is the word “Papa” over the outline of Istria, the beautiful peninsula in Croatia where he was born. It’s a tattoo I knew that I would never regret, but instead, celebrate. It’s a reminder of him that I kiss every day.”

In addition to this tattoo and the Wage Hope tattoo, Juricic has a third one that marks his experience as a pancreatic cancer survivor.

“My third and last tattoo runs across the scar on my abdomen. I have one stitch mark for each year since my life-saving Whipple procedure. It’s not one that people get to see often, but it is very important to me. My scar is already a testament of my experience and the stitch marks are counting the time since those scary days. The tattoo brings my scar to life.”

Franco Juricic at a volunteer training in 2016, explaining the significance behind his tattoos.

When Juricic got involved with PanCAN, the five-year survival rate was just 6 percent. He knew he had to do something to fight back.

“I felt called to respond and give back to make sure that others did not meet the bleak future that a diagnosis meant at that time. Ultimately, I would not want my twins, who were just 2 years old when I was diagnosed, to face the same long odds in 40 years when they would be the age that I was diagnosed.” 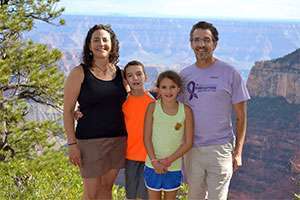 Franco with his family

Juricic currently serves as a Mission Chair for the PanCAN New Jersey Affiliate of volunteers. His role is to lead committees and efforts focused on bringing pancreatic cancer education to the public and healthcare professionals, directing advocacy efforts and fostering caregiver and survivor engagement.

Because of his passion for engaging the community, Juricic makes a strong case for why it’s so important to become involved and how volunteering moves progress forward.

“Pancreatic cancer can be a very sudden and devastating disease. It wreaks havoc on those diagnosed and their caregivers. Participating in PanCAN events – whether it’s a PurpleStride, Advocacy Day or any kind of fundraiser – are all real ways we can make a difference.

“PanCAN offers positive ways to help the cause, which can be very empowering. We’ve developed a welcoming and tight community where many of us are like family.”

Inspired by Franco’s dedication to the cause? Check out what's happening in your community and see how you can start volunteering today!
Share  Tweet
More on:
You may also be interested in...