Donors  Stories of Hope  ‘This Is Us’ Creator Shares His Own Story of Loss, Which Inspired PurpleStride Team

‘This Is Us’ Creator Shares His Own Story of Loss, Which Inspired PurpleStride Team 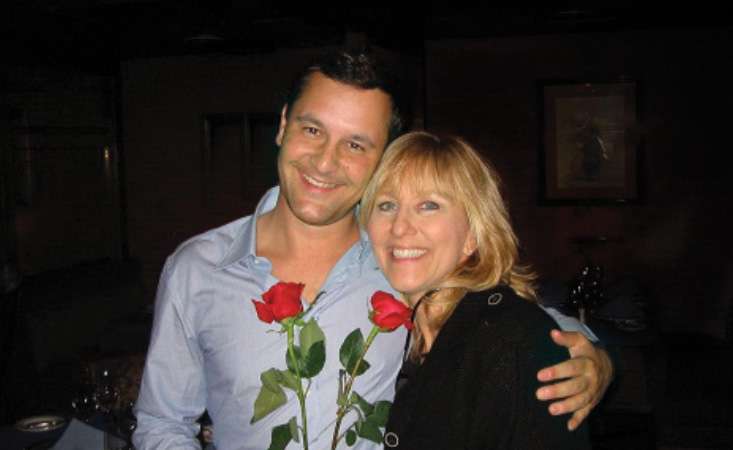 Screenwriter and “This Is Us” creator Dan Fogelman and his mom, Joyce.

Editor’s note: Stories are at the heart of PanCAN. Today, on National Tell a Story Day, we share a story written by Dan Fogelman. Dan is a pro at telling a good story – he is a screenwriter and producer and is known for creating the award-winning “This Is Us,” television show as well as numerous other hits. He will participate in PanCAN’s PurpleStride Los Angeles on May 1. Join Dan on his team and raise funds for all those fighting pancreatic cancer today.

My mom, Joyce, was a larger-than-life person. One of those people that others gravitate toward. She was a go-to for many people – their first phone call when they had a problem or needed advice. She was very funny, very frugal and a bit of a knockout…a somewhat devastating thing for a son growing up (“Hey Dan, your mom is pretty hot,” was a common refrain during my early teen years.)!

Mom was there at the very start of my career and it all kind of mystified her. I would tell her about big meetings with fancy movie stars or directors and she would mainly focus on things like whether I’d gotten my parking validated.

We lost her suddenly to pancreatic cancer, and we never had a proper goodbye.

After she passed away, I went to her townhouse in New Jersey with my sister to clean it out. A difficult time for any child who has lost a parent.

When I went into her closet, I found a plastic bin. My first live-action film had come out not too long before that – “Fred Claus.” It didn’t perform well at the box office and the reviews were rough. Many attributed their bad reviews to my screenplay. Inside this bin in her closet, I saw that Mom had collected EVERY review of the film from every newspaper in the Tri-State Area, and she had highlighted every mention of my name. (Even though it was usually found in sentences like, “The failure of the film can be attributed to the lackluster screenplay of Dan Fogelman.”)

My mom had ignored the sentiments of the reviews and gleefully highlighted my name.

Which I’ve always thought, in its own way, was quite a lovely goodbye note.

My mom’s pancreatic cancer – an islet cell tumor – was found during a routine physical when something showed up in her bloodwork. She had had no symptoms. Unfortunately, though, by the time the tumor was found it was very large and was nearing other organs. The cancer had not spread, but future growth would put pressure on other organs and create system failure.

We consulted oncologists and surgeons. We tried a form of chemo that shrunk the tumor at the margins a tiny bit, and then she opted for a surgery that was somewhat risky. Despite the removal of the tumor, she did not survive the surgery.

One of the trickiest things after her diagnosis was gathering information and making early medical decisions. It was overwhelming. But for me, organizing thoughts and researching quickly was a giant part of helping us gain control over something that felt so uncontrollable.

PanCAN can help play a huge role in this area, helping patients and families get organized and make good decisions at every step.

Pancreatic cancer is a devastating diagnosis, but advances are being made and there is hope in that. We found that staying positive and hopeful from the start had a big effect on how Mom was feeling and doing.

Losing my mom has certainly influenced my work over the past decade. So much so that I’ve actually had to step back recently and tell myself to take a break from writing about Mom for a minute. I wrote a film that was very much about her (“The Guilt Trip”), and losing her (less exact, but still…) is at the center of “This Is Us” and a recent film I made called “Life Itself.”

On May 1, for PurpleStride LA, I’m going to think about Mom a lot that day. I have lots of old movies of our family that I’ve digitized and every so often, when I really want to focus my thinking on her and recalibrate a little, I pop them in and let myself feel.

I think she would be thrilled that I’m involved with PanCAN. She had a rough go emotionally with her diagnosis. Knowing there’s a cause and an organization where I can try to help others in a similar situation would really speak to her.

Join Dan and participate in your local PanCAN PurpleStride in tribute to a loved one – it’s free to register.
Share  Tweet
More on:
You may also be interested in...