Ultramarathoner Darin Smith Encourages Men to Listen to Their Bodies 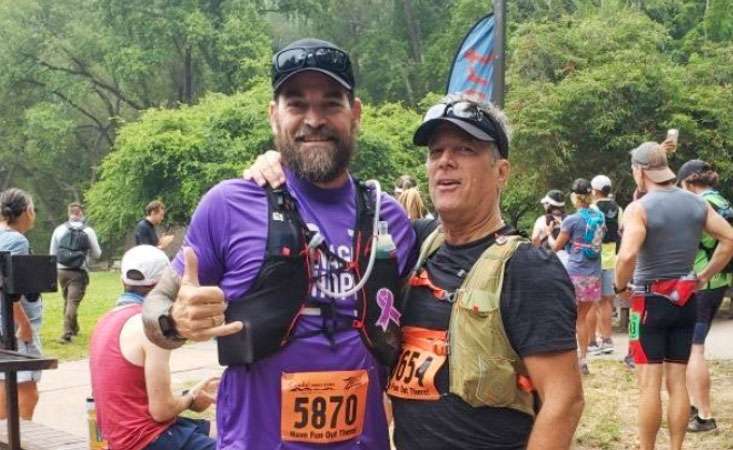 Darin, a pancreatic cancer survivor, completed an ultramarathon with his friend, Brad.

Men, I’ve got some advice for you: Pay attention to your body. If something doesn’t feel right, don’t ignore it, get it checked out. And if your significant other suggests that, listen. They’re saying it out of love.

Also, move your body. You don’t have to run a marathon. Start by taking a walk around the block. Even if you never get sick, your body will benefit.

In June 2018, I was 47, my daughter, Addison, was 10, and I was engaged to be married in two months. I never imagined a pancreatic cancer diagnosis in my future.

At six feet and 210 pounds, I was in pretty good shape. I was training to run a 50-mile ultra-marathon in Leadville, Colo. My plan was to run 50 miles for my 50th birthday. The farthest I had ever run was 13.1 miles, so this going to be a monumental challenge for me.

I am not a fitness fanatic by any stretch of the imagination. I don’t count calories and I’ve never really dieted – I just monitor my weight and make adjustments as needed. To prep for the marathon, I started running about 40 miles a week. I was losing weight and feeling great – that’s about the time I started to notice some changes in my body.

My stool changed and I was having digestive problems. I thought it might be my new exercise routine or the change in my diet that was causing these issues – I wasn’t feeling any pain. When I felt tired, I figured it was from all the running I was doing.

My wife, Pandora, noticed the changes and asked me to go see my doctor, but I didn’t think it was necessary. Like a lot of guys, I brush off medical issues and don’t jump at the idea of going to the doctor. Besides, I was embarrassed to tell my doctor about some of my symptoms.

A couple of months went by and my symptoms hadn’t improved. I got tired of Pandora asking me if I’d gone to the doctor, so I made an appointment.

I expected my doctor to tell me there was nothing wrong with me, but that’s not what happened. She didn’t say anything right away. She looked at me and asked if I realized I was jaundiced. I had no idea. She thought I had gallstones and immediately sent me to the emergency room.

The ER doctor did a CT scan and explained to me that I didn’t have gallstones. I had a tumor on my pancreas that was pressing on my bile duct. After a series of blood tests and procedures, the doctor confirmed it.

I had pancreatic cancer – stage III. He recommended a yearlong treatment plan that included chemotherapy, a Whipple surgery, more chemo and then radiation.

I didn’t want to miss a single chemo treatment because I was sick, so maintaining a healthy immune system was critical. Exercise strengthens your immune system to help fight illness. It also boosts your endorphins, which relieve stress and pain. My goal was to make it to every one of my seven chemo treatments, be ready physically for the six-hour Whipple surgery, recover and then finish the last five chemo treatments. 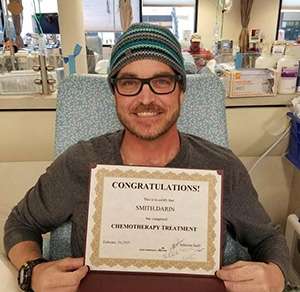 Darin was thrilled when he completed his final chemo treatment – he never missed even one!

After surgery, my doctor explained to me that being in such good physical condition had made his job easier. He was able to access all the areas and margins around the tumor. I was up and walking around the day after surgery, even with 25 staples in my stomach. I spent about a week in the hospital, some of it in ICU because of internal bleeding.

Less than a month after surgery I started chemo again and finished all five treatments. In total, I had gone through nearly 12 months of treatment. I had lost 60 pounds and was weak and tired.

Despite that, I chose to go through radiation treatment after surgery. I received 12 targeted treatments within three months. By this point, I was even weaker and more tired. I couldn’t do much physical exercise, so I focused on my mental health, which was just as important for me.

Last year, I met a man named Steve. He had terminal cancer but you would never know it. There was an acronym he liked to use: P.M.A. Positive. Mental. Attitude. After my surgery and radiation treatments, I used my P.M.A. to set small goals for myself, like walking around the block twice a day. Little by little, I got to where I am today, healthy and feeling good. 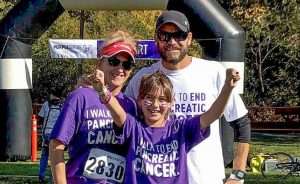 Survivor Darin Smith with his wife, Pandora, and his daughter, Addison.

A few months after my diagnosis, Pandora found out about PanCAN Patient Services through a coworker. Our case manager answered all her questions and helped ease some of her anxiety. Our family participated in our first PurpleStride San Francisco and loved it. This year will be our fourth PurpleStride.

Two of the events have been virtual because of COVID – I can’t wait for the next one in-person. We enjoy the comradery and the connectedness. Seeing familiar faces, learning about the progress being made in pancreatic cancer, acknowledging survivors and remembering those who have passed.

It’s been three years since my diagnosis. A few days ago, I participated in a 50K ultramarathon. I ran 31 miles in under nine hours. It wasn’t the 50-mile race I wanted to run but there’s always next year.

I feel good about my life journey. In my 30s, I was out of shape and weighed 240 pounds. In my 40s, I went through chemo, surgery and radiation and weighed a mere 156 pounds. In a few months, I’ll turn 50 – I feel better than ever and weigh in at a healthy 185 pounds.

Guys, pay attention to your body. It could save your life. Thanks for listening to my story.