Stories of Hope  Volunteers  A Story of Everlasting Friendship

A Story of Everlasting Friendship 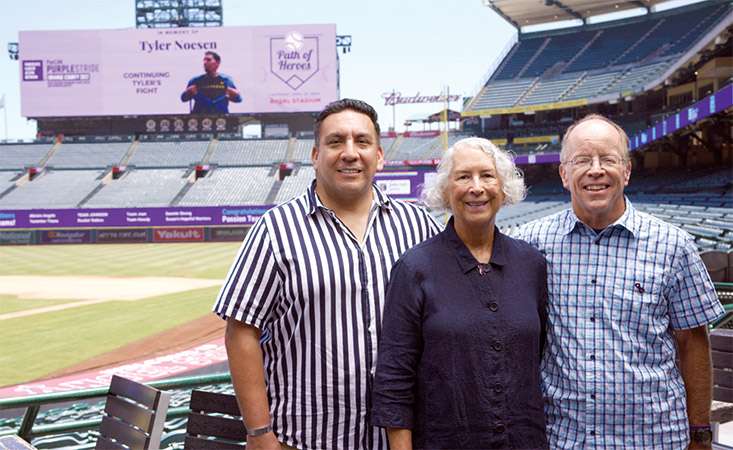 JB Jaso, left, is an advocate and volunteer for PanCAN who is continuing his friend Tyler Noesen’s fight. Here, with Tyler’s parents, Dennis and Yvonne, with Tyler’s photo in the background.

They met through their high school cross country running team, and an instant connection cemented a friendship that took them through college and young adulthood. After pancreatic cancer entered the picture when the two were in their 20s, their bond got even stronger.

It’s now been 10 years since Tyler Noesen passed away of the disease, and when JB Jaso is reminded of Tyler – which is every day – “carpe diem” comes to mind.

Because Tyler lived that way. Seizing the day and living life to the fullest.

JB said Tyler wrote out a bucket list when he was a kid. Among the things on it were becoming an Eagle Scout, driving a fast car, going skydiving and getting his pilot’s license.

“He knew what he wanted to achieve in life,” JB said. “And he went after it all.” 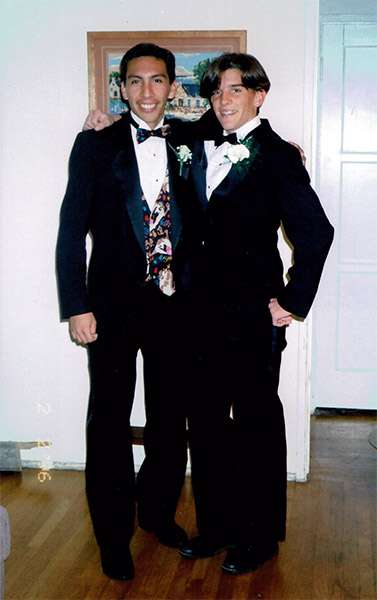 JB (left) and Tyler were fast friends when they met in high school.

JB was 15 and Tyler was 13 when they met at Long Beach Polytechnic High School in Southern California. The incoming freshman class, which included Tyler, had a good group of runners and Tyler was among the fastest. In fact, JB and Tyler’s cross-country team won the state championship several times.

The boys were ambitious and competitive, with a lot of energy. Lamenting that there were no 5K or 10K races in their area, they started their own in their Long Beach community and oversaw it for three years. By the time JB left for the University of Arizona, the “Bixby Knolls 5K/10K Run” had multiple community sponsorships and an operating budget of $80,000.

Tyler was a popular student, with a spark that was pure light and happiness. “He was always the life of the party,” JB said, “but he didn’t try to outshine anyone. He always wanted to include people. He wanted to have a good, fun, adventurous time.”

Tyler attended the University of California, Berkeley, where he ran cross-country. He met his future wife there, and the two moved back to Southern California where Tyler started his career as an aerospace engineer.

A natural athlete, Tyler excelled at soccer, too. During a match, when he went up to head the ball, he felt a pain in his abdomen.

JB was in Hawaii, stationed there prior to serving in Iraq, when he heard the news. Tyler had stage 4 pancreatic cancer – not a pulled muscle from that soccer match, as he had suspected. Like so many, JB knew little about the disease and had no idea what the survival rate was. Neither did his friends – JB remembers their track teammates talking, certain Tyler would be just fine.

“It’s Tyler,” they all said. “He’s a fighter and he’ll push through this. He’ll do treatment and be back at it in no time.” 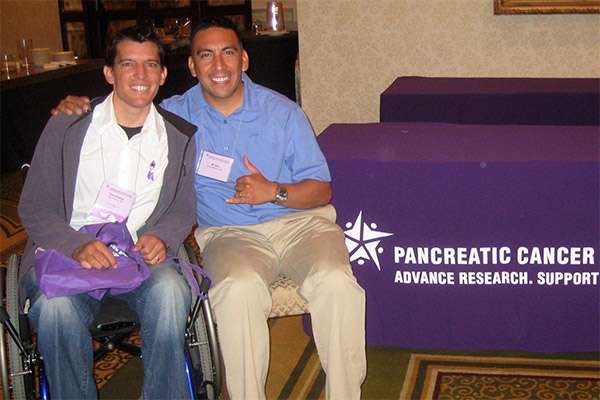 He continued to seize the day for the next five-and-a-half years, ticking off items from his childhood bucket list.

JB said, “He got that pilot’s license. He went skydiving. He drove the fast car. And he did it as a pancreatic cancer patient.”

In 2010, JB saw Tyler for the first time since his diagnosis. It was at PanCAN’s Advocacy Day event in Washington, D.C., held annually for PanCAN advocates to meet with Congress and urge them to increase federal research funding for pancreatic cancer. Tyler was attending with his parents, Dennis and Yvonne. The family had called JB and invited him to join them there that year.

“We hugged, started talking and immediately caught up on everything,” JB said. “It was so cool to see him again, although he was in a very different state than the last time I had seen him. He was in a wheelchair. It was clear that he was fighting cancer.

“I also learned the pancreatic cancer survival rate that day. It was a very emotional time.”

The following year, in June 2011, the Noesens invited JB to attend PanCAN Advocacy Day again. He told them, absolutely. As the date neared, Tyler’s health declined and he could not make the trip to Washington. JB represented Tyler and his parents, meeting with 13 or 14 congressional leaders from two congressional districts in one day. He was Tyler’s voice. He remembers that the members of Congress and their staffers were caring, compassionate and concerned. They recalled Tyler, Dennis and Yvonne from the prior year and said they would keep them all in their thoughts. 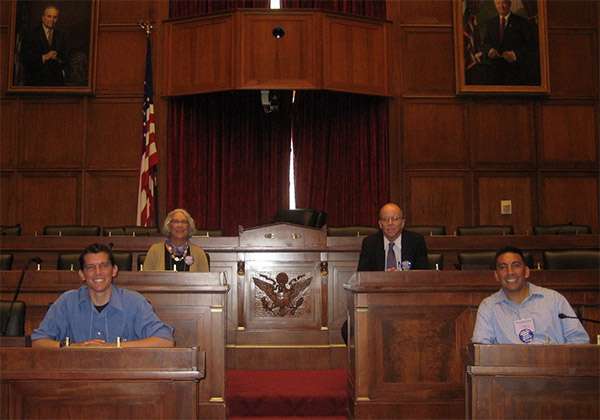 JB, Tyler and Tyler’s parents, Dennis and Yvonne, at PanCAN Advocacy Day 2010 when they met with Congress to urge increased research funding for pancreatic cancer.

Today, advocates from all 50 states, numbering in the hundreds and growing each year, continue to urge Congress to increase funding for pancreatic cancer. Survivors are among the advocates, but mainly, it’s families and friends who, like JB, attend to honor a memory and be a voice for those who are not here to speak up.

JB is always among them. He’s attended PanCAN advocacy events every year since 2010. And last year, when he moved back to Southern California after 24 years away, he took on a volunteer leadership role – overseeing the Orange County Affiliate of PanCAN volunteers. A strong, successful and familial group, JB’s vision as Affiliate Chair is to take the affiliate even further – raising more awareness and funds.

“Being involved with PanCAN is a constant reminder of him. It also reminds me of his spark and how I need to continue that spark for him.”

JB created a hashtag on social media called #continuingtylersfight. That sentiment carries through everything JB does…

Through his continued relationship with Tyler’s parents (“my second set of parents,” he calls them).

Through his regular runs through his Long Beach neighborhood.

When he’s on the Noesens’ boat…recently he brought his children for a ride. It’s the same boat that he and Tyler would take out as teens, kicking up the waves, knee boarding.

Tyler is even present in the children of his friends – there are six “Tylers” in the group, all named after him.

“We commented on the fact that we were both in a combat situation. We had been fighting two different enemies, but we had a common interest in getting out alive. Unfortunately, pancreatic cancer won against Tyler, but I won’t let that end the fight for me. And that’s what it’s always been about.”

A few months ago, PanCAN PurpleStride Orange County was held at Angel Stadium in Anaheim, Calif., where JB works. He had arranged for the event’s “path of heroes,” where people affected by pancreatic cancer are honored and remembered by featuring them on the field’s jumbotron. The display of images and names literally stopped the walkers in their tracks as they took time out to watch.

“There were many tears as we all watched the screen showing people we had known and loved. Tyler was there. It really brought it all home.”

One of the last videos of Tyler was taken the day before he died, in January 2012. He was in his bed, on oxygen, and frail. But he still had energy and light. JB smiles, remembering him showing off his dance moves – in bed, lying down.