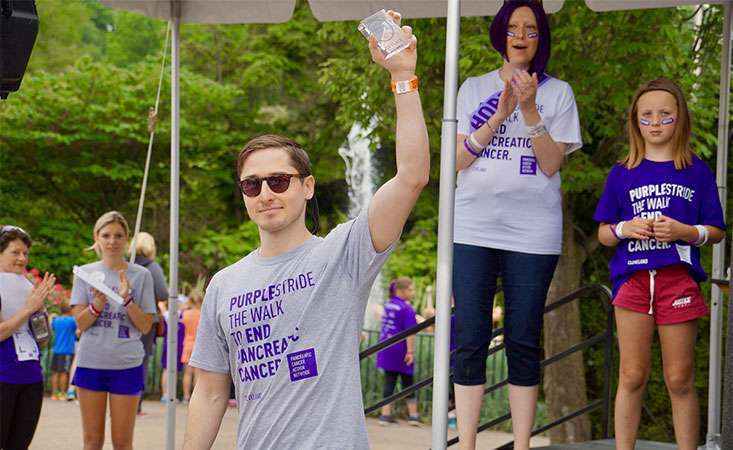 April 7-13 is Volunteer Appreciation Week, and to show our appreciation, we want to highlight a few of the many volunteers who embody what it means to be a part of the Pancreatic Cancer Action Network (PanCAN) family. The work we do at PanCAN would not be possible without the thousands across the country who dedicate countless hours to making more moments that matter for pancreatic cancer patients and their families.

Those who work directly with volunteers know best how important they are to the mission, including Sherryce Robinson, a Community Relationship Manager, who summed it up, saying, “Volunteers are the heart and soul of our organization…They are the go-to, the face and the forefront in the fight against pancreatic cancer.”

If you are also inspired by these dedicated individuals, learn more about how you can volunteer. 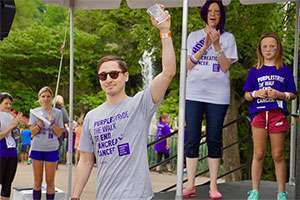 Peter Waxman was a top Team Captain for years before eventually becoming the Cleveland Affiliate’s Sponsorship & Flagship Chair. As a PurpleStride Team Captain, he led the top fundraising team across all three Ohio PurpleStride events. PurpleStride 2018 was Waxman’s first year in a volunteer leadership role, and he took PurpleStride Cleveland’s sponsorship income from $10,000 in 2017 (1 sponsor) to $24,000 in 2018 (6 sponsors).

He has also been instrumental in bringing on the first ever flagship for PurpleStride 2019 in Cleveland, which happens to be one of the premiere health systems in northeast Ohio for pancreatic cancer patients. Waxman has big plans for 2019, and he wants to topple his 2018 record. He fights in honor of his mom, Connie Waxman. 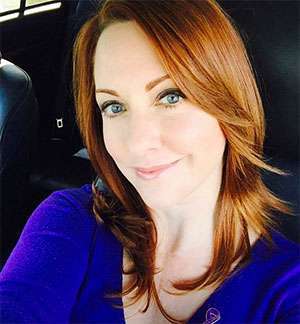 Meghan Combs began volunteering after losing her mother to pancreatic cancer in 2009. Now in her 10th year of volunteering with PanCAN, Combs serves as the Sponsorship & Flagship Chair for the Detroit Affiliate. She recently secured $20,000 in sponsorships for PurpleStride Detroit, which is a huge increase over recent years. Combs is always at the ready to help the affiliate where she is needed. 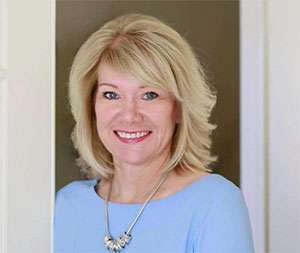 Lynne Jakubowski has been an official volunteer since August 2017 as Affiliate Chair for the newly established Western New York Affiliate, which had its first meeting in January 2018. She learned about PanCAN when her husband passed away in 2014, only four months after diagnosis.

As the Affiliate Chair, Jakubowski has gone above and beyond to grow the affiliate. Thanks to her hard work, their PurpleStride event is already at more than 30 percent of its fundraising goal six months out, and with 30 people at her last affiliate meeting, Jakubowski is truly making a name for PanCAN and the Western New York Affiliate in her local community. 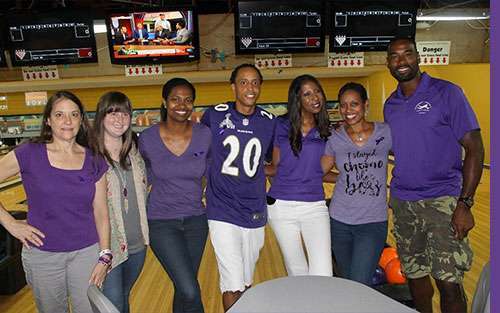 Freeman is passionate about the cause and getting others involved. He is always so welcoming and thinking of ways to include others. Kathryn Evans, Community Relationship Manager overseeing the Atlanta Affiliate says of Snapper, “He is a great leader. Ego has no part in what he does. It is all about how to create the biggest impact. Snapper is always looking for opportunities to connect and expand our reach in the community and grow PurpleStride.” 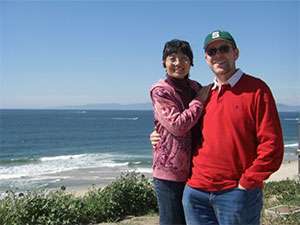 Rick Pinson became involved with PanCAN in 2010 after his wife, Linda, was diagnosed with pancreatic cancer. As a caregiver, the resources and support he received through the Survivor and Caregiver Network and the Orange County Affiliate were invaluable through his wife’s fight. Pinson wanted to continue to be involved after she passed away in 2012, and he took on the role of Advocacy Chair.

Of his work in that role, Pinson says, “It has been a great fit for me because of my interest in government and politics.  It has been very enjoyable and fulfilling to see the progress we have made in continuing to increase federal research money from year to year.

“While government can be slow, I have learned that persistence pays off. A dedicated organization like PanCAN that doesn’t give up can still accomplish great things … I have met many hardworking, sincere members of Congress and aides who are dedicated to doing the right thing.” 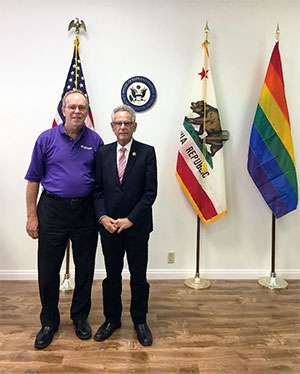 Pinson is also the State Advocacy Leader for California, and he is extremely dedicated to advocacy outreach for increased funding for pancreatic cancer research. He is currently working on recruiting volunteers for PanCAN by reaching out to people who have taken advocacy actions in his affiliate’s area.

He jumped at the opportunity to take action in our most recent advocacy campaign to create a dedicated pancreatic cancer research program at the Department of Defense. Pinson even sends district specific updates to Members of Congress asking each of them to take action.