Stories of Hope  Your PanCAN PurpleStride Supports People Like Liz, Diagnosed at Age 20

Your PanCAN PurpleStride Supports People Like Liz, Diagnosed at Age 20 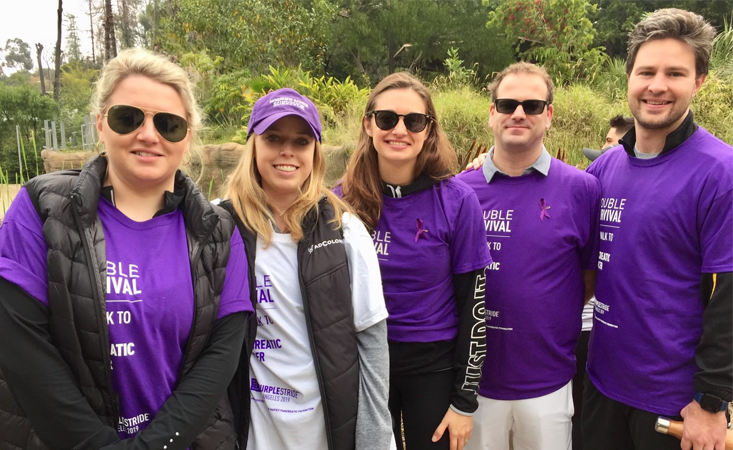 Liz Waldeck-Pinckert, second from left, with friends and her husband, Richard, far right, at PanCAN PurpleStride Los Angeles in 2019.

Editor’s note: Jamie Foltz, who is the PurpleStride Chair for the PanCAN Columbus, Ohio, Affiliate of volunteers, wrote today’s article.

In the world of pancreatic cancer, being early is everything. Early detection and early treatment are among the reasons we have survivors like Liz Waldeck-Pinckert.

Liz was diagnosed with pancreatic cancer when she was just 20 years old. She was having mild symptoms that she pushed her doctor to explore. At such an early age, she was already advocating for herself. Today she is a survivor of the third deadliest form of cancer.

I recently sat down with Liz to talk about her journey.  During our conversation, the idea of being early came up a lot.

We talked about being diagnosed at such an early age and how joining the PanCAN PurpleStride family –    early in that journey – gave her a sense of community that she needed during the most challenging moments of her life.

Liz attended her first PurpleStride in Los Angeles in 2013. Her doctor had suggested she reach out to PanCAN for continued resources and support. It was there, in those early days, that she found her purple people.

She said, “For me, I just felt very much alone. I was in college at the time. I felt very singled out. I needed that community feel.”

She’s since attended PanCAN PurpleStride events throughout her journey as a survivor because it’s been the place she feels most at home, she said.

“The more I go, the more comfortable it feels. It’s always encouraging for myself and for my friends and family that have attended. It shows hope that there could be a positive outcome at the end. The more people that can collaborate and come together and fundraise, the more positive outcomes we can have.”

Liz continued to explain how making the choice to attend those early PurpleStride events is what has given her the confidence to stay involved in the cause. She said, “You need to be able to relate to other people. You build the courage to stand out, to go on stage and stand next to other survivors. I’m young, so it was always hard to accept it. Going to those events gave me the comfort and confidence to accept everything I have gone through.”

What she gained by being a part of PanCAN PurpleStride through the years is beyond measure. So much that she’s ready and already signed up for PurpleStride Los Angeles 2022.

Register now for a PanCAN PurpleStride near you – taking place on One Big Day – April 30, 2022. You’ll support people who have faced pancreatic cancer – people like Liz.

“Signing up now and getting a head-start on fundraising means you can make an even bigger difference,” Liz said. “I want to remind those who supported me in the early days of my diagnosis, that being early to support PurpleStride will give someone else the same resources, the same community, and the same hope they gave me.”

PanCAN provides pancreatic cancer patients and families with free, one-to-one support with the funds you donate or raise for PurpleStride, as well as research that can change the future of this disease..

Liz told me that without her PanCAN family and the confidence she found at PanCAN PurpleStride, she really doesn’t know what she would have done. She laughed as she said, “I’d have needed a lot of therapy.”

But the sentiment was genuine. She continued, “I think that’s the truth, though, right? There’s only so much support your doctors, family and friends can provide. The emotional connection that I needed to accept the survivor’s guilt, that I was OK and the next person was not…I just think without PanCAN there would be a big gap in accepting all that I have gone through.”

Liz is ready to go for PanCAN PurpleStride Los Angeles on April 30, 2022. Aside from getting those fun purple shoelaces for registering early, I asked why she thought others should join her in signing up now.

She said, “Register early and you won’t be rushed to fundraise, you can enjoy each and every moment as you watch yourself making a bigger impact. You’ll be more likely to reach those goals. And you can show others that when you donate today, you can save a life tomorrow.”

Register today for PanCAN PurpleStride 2022 and donate or raise $25, and you’ll receive a pair of limited-edition PurpleStride shoelaces.

This article written by Jamie Foltz.