Editor’s note: Lupe Romero passed away in February 2019, but her legacy lives on. 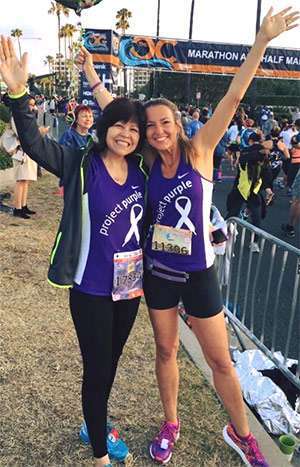 The first time I went skydiving was seven months after I was diagnosed with pancreatic cancer. I was in the middle of aggressive chemo treatments, but I had decided that cancer could do whatever it wanted to my body but that it wouldn’t touch my soul or my spirit.

I was determined to stay strong physically, mentally and spiritually.

Six weeks after my Whipple procedure in 2013, I ran the last mile of the Los Angeles Marathon with the amazing Julie Weiss, also known as the “Marathon Goddess.” She was running 52 marathons in 52 weeks; the LA Marathon was her 52nd; and I was one of the people for whom she was dedicating her run. It was emotional because I, myself, had previously run 10 LA Marathons, and I had dedicated each one to people in need. I never imagined that someone would be dedicating their marathon to me.

My name is Lupe Romero, and I am a four-year pancreatic cancer survivor currently fighting the disease for the second time.

I was diagnosed with pancreatic cancer for the first time just after my 50th birthday – February 2012.  After experiencing lower back pain (which I attributed to many years of running) and other symptoms, I made an appointment with my doctor. Extensive lab work revealed abnormal results. I was admitted to the community hospital where I work with the initial diagnosis of gallstones. 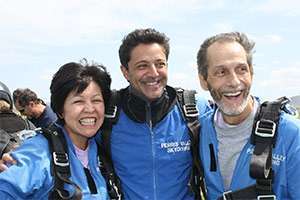 Lupe seizing the moment on a skydiving adventure.

The next morning, a routine CT showed not gallstones, but a mass on the head of my pancreas.

It was pancreatic cancer, and I was told I had six months to a year to live.

The next day, a surgeon came into my hospital room and said that I was a candidate for the Whipple procedure. I was given a 90 percent chance that the cancer would be removed. My family was very excited but remained cautious, since there was a small chance the procedure would not work.

During the procedure, the surgeon discovered the cancer had attached itself to the mesenteric vein, so the operation was terminated.

While being treated, a friend told me about the Pancreatic Cancer Action Network. I attended my first PurpleLight vigil for hope and immediately felt a great sense of community. People knew what I was going through and were there to help, and I felt a sense of safety, comfort and hope. 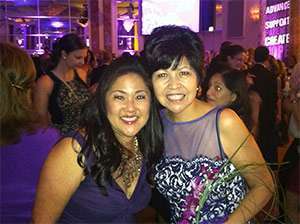 Lupe (right)) and Julia Tominaga, a member of the Pancreatic Cancer Action Network staff, at An Evening with The Stars gala in 2012.

I was inspired by all of the speakers that night, but Pamela Acosta Marquardt (the Pancreatic Cancer Action Network’s founder) said something that stood out to me. She talked about the challenges pancreatic cancer patients face and how smaller hospitals that don’t specialize in the disease often aren’t fully equipped to help patients, but that the Pancreatic Cancer Action Network’s PanCAN Patient Services Case Managers could provide information about specialists. This resonated with me and sparked my curiosity to look into other institutions that specialized in pancreatic cancer.

I ended up making an appointment at the UCLA Agi Hirshberg Center for Pancreatic Diseases. There, I underwent treatment to shrink my tumor and I went on to have a successful Whipple procedure on January 29, 2013.

I went on to complete two half marathons after my diagnosis, plus a full marathon; I earned an additional black stripe on my karate belt; and just I recently went skydiving for the fourth time. Yes, fourth!!

I was cancer-free for over a year, but in May 2014 I was given the news that I had a reoccurrence. Sadly, it was too much for my husband to withstand. My own champion, my best friend of 38 years, passed away two months later from a different illness. I miss him every day.

But no matter what obstacles I face with this disease, pancreatic cancer will never change who I am and I will not allow it to take away my joy. 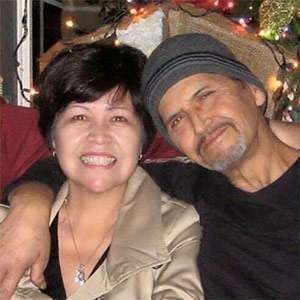 Lupe with her best friend of 38 years – her late husband, Louie.

In fact, since my reoccurrence, I’ve traveled to Mexico, climbed pyramids, gone horseback riding and walked on volcano ruins.  I have spent time with my grandchildren, and I plan to go skydiving again later this year with some of my close friends that I met through the Pancreatic Cancer Action Network – my “purple family.” This organization is a huge part of my life and I’m truly grateful for what the Pancreatic Cancer Action Network has done for all of us survivors.

On good days and bad days, I inhale life to the fullest, with my three children and my purple family beside me. They’re always in my heart and my soul.