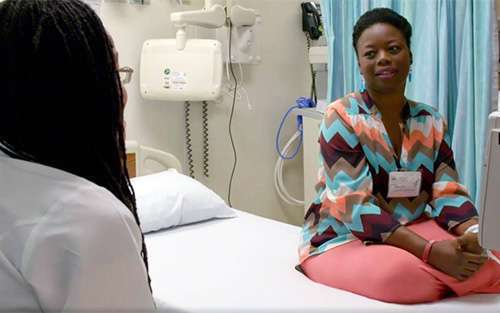 The second episode of the three-part Discovery documentary on clinical trials, First in Human, follows the gripping story of three patients at the National Institutes of Health (NIH) Building 10. It is within this renowned facility that groundbreaking therapies are being tested on these patients who bravely volunteer to be the first to try them in what are called “first in human” trials.

“I would describe our patients as heroes, because when they come here, they’re scared. But they fight through it,” said Maureen Gormley, RN, PhD, chief operating officer of Building 10.

Part of the mission of the NIH is to investigate rare diseases to better understand more common diseases, such as cancer. “Rare diseases are the pinhole through which we peer, and what they do is bring into focus everything in the distance,” noted Steve Holland, MD, chief of the Laboratory of Clinical Infectious Diseases.

Clinical trials are built on decades of research in what appear to be unrelated fields such as immunology, toxicology or genetics. But all of them can play a role in developing treatments that can improve patient outcomes. “If we weren’t doing research, if we weren’t trying to push the edge of the envelope, people would continue to die from their disease,” noted research immunologist Lauren Wood, MD.

Based on evidence, the Pancreatic Cancer Action Network (PanCAN) stands by the position that pancreatic cancer patients who participate in clinical research have better outcomes; every treatment available today was approved through a clinical trial.

“When it comes to the clinical trial process, in most cases, without risk, we don’t make progress,” says Allison Rosenzweig, PhD, scientific communications manager at PanCAN.

Wiese’s medical team, led by Dr. Holland, chose to proceed with a bone marrow transplant over concern that she wouldn’t recover well from surgery. Her mother, Jan, served as the bone marrow donor, essentially replacing her failing immune system with her mother’s healthy bone marrow cells.

A bone marrow transplant was also the trial treatment for Diedre Williams, a mother of two who suffers from the deadly disorder sickle cell disease. A major characteristic of sickle cell is severe and frequent episodes of pain. Williams confessed, “The pain became unmanageable on my own. And I never knew which crisis was going to take me out.”

“It’s not simply that this disease limits a patient’s life span, it limits their life. They can no longer work or do everyday things,” said John Tisdale, MD, who is leading the clinical trial with Williams.

Williams’ sister, Tanisha, ended up being a perfect match for her as a bone marrow donor. As Williams took a video of her sister’s bone marrow cells moving into her body during the treatment, she smiled and said, “How sweet it is to see life flowin’ into me.”

Bo Cooper, an end-stage leukemia patient from episode one, was infused with his own genetically modified immune cells, now called CAR-T cells, in the hope they would target and wipe out his leukemia.

All the patients in this episode were aware of the risks involved before they began the clinical trial. But they were willing to go through the risks, because they believed they could be better off, potentially even cured. As Williams confided, “I don’t want to die but I don’t want to live and not take this opportunity. I’m ready to fight to get to the other side. Now we got hope, which is something I never thought I would have.”

PanCAN strongly recommends clinical trials at diagnosis and during every treatment decision.

And, join us on Twitter on August 24, while we live tweet during the final episode of “First in Human.”