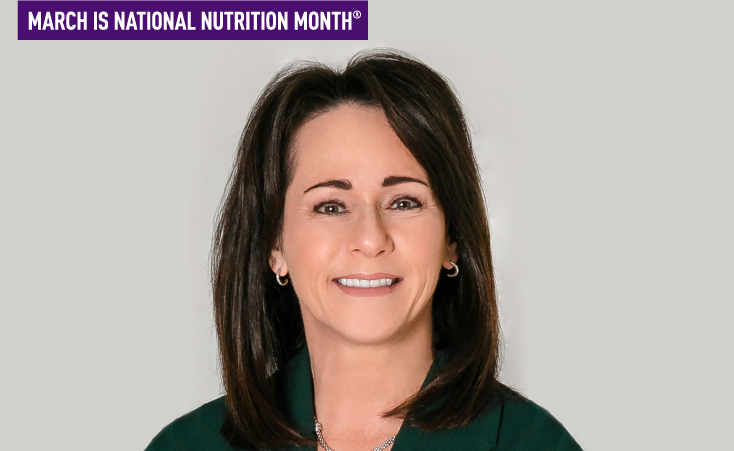 Seafood and sweet potatoes helped get Diana Roth through chemotherapy.

The Chicago resident was diagnosed with stage IIB pancreatic cancer in 2009 after she experienced searing pain in her rib cage. In a matter of three weeks, she advocated for herself and sought out a second opinion, which led to the Whipple procedure at the Mayo Clinic. Then, she received chemotherapy and 25 rounds of radiation.

The treatment wasn’t easy, but she made a pact with herself to see food as fuel to get her to the finish line – and to listen to her body when it told her it needed something, like seafood.

Her husband was right there with her to get her the food she was craving.

“The day before chemo, we would go to this nice seafood restaurant and I would have my crab legs and a sweet potato,” she said. “We made it an event.”

The routine helped to keep her spirits up. It also gave her the strength to move ahead.

“If you’re not feeding yourself the right foods, you likely don’t have the energy to do the few things that you really want to do that day,” she said. “Pancreatic cancer changed my entire mental focus on nutrition and what I eat – it truly fuels your body.”

Now, as a 12-year survivor, nutrition still looms large as a daily focus.

She continues to take pancreatic enzymes, which she sought out after experiencing a range of digestive issues as a result of the Whipple procedure.

The diet and nutrition resources on PanCAN’s website helped Diana understand how pancreatic enzymes work and why taking them can be important. After she received a prescription for them, she saw an immediate positive impact on her health. She’s grateful that her oncologist walked her through how to take them – with food – and explained that adjusting the dosage can be critical to alleviate symptoms.

Sign up for our free March 24 webinar titled “Diet and Nutrition: What Pancreatic Cancer Patients and Caregivers Need to Know,” featuring a panel of nutrition experts, a Patient Services manager/representative and a pancreatic cancer survivor.

As a PanCAN Survivor and Caregiver Network volunteer, Diana shares her experience with other patients, always emphasizing how important it is for them to ask their doctor about pancreatic enzymes. She encourages patients to advocate for themselves if they are experiencing symptoms like cramping after meals, feelings of indigestion or large amounts of gas – enzymes could be helpful.

“I share information about enzymes more than anything with the patients I’ve spoken to over the last 12 years,” she said. “It has been a life-changer for them.”

Another key topic: bowel movements. Although some patients may be hesitant at first, for Diana, “poop talk” can be critical to understand what’s happening with a person’s digestive system. Monitoring changes and sharing that information with their healthcare providers can help uncover problems.

“When I talk to patients, shortly after we begin sharing stories, we get right into discussing bowel movements,” she laughed. “We all talk about it because it is just part of our lives.”

Type I diabetes – a common challenge for patients with pancreatic cancer – is also something Diana can speak to. She developed it after her surgery.

“Can you believe that as tough as pancreatic cancer is, being a diabetic has been harder,” she said. “Way harder. And I say that because every day -- what I eat, what I drink -- I don’t have a second of a break from being a diabetic. I have time away from being a cancer survivor, but the diabetes is hard.”

She found an endocrinologist to help her manage this aspect of her health, a step she urges other patients to take early in their diagnosis to ensure they are tracking any pancreatic insulin issues. Some may never require medication, but it’s good to monitor.

“When the pancreas is compromised, so will be the insulin production in our bodies,” she said. “I think this is something that could be highlighted a bit more, as patients need to understand this is part of their health journey, along with making good diet and nutrition choices.”

Much has changed in the 12 years since Diana’s diagnosis, as the survival rate for pancreatic cancer has steadily ticked up. Now, she said she’s happy that long-term nutritional needs of patients are more of a focus.

“They didn’t discuss much on nutrition when I was diagnosed because they just wanted me to get through what I was faced with,” she said. “Twelve years later, you’re seeing more survivors. There is more discussion around post-treatment survivorship.”

It’s a discussion that PanCAN Patient Services is at the center of, providing resources and support.

“I found the PanCAN diet and nutrition booklet filled with critical information that I needed to ask the right questions and reach out to the right healthcare providers,” Diana said. “I realized I could ask to speak with a dietitian at a clinic and my insurance would cover that cost.  If patients knew this, I think they would utilize this service a lot more.”

As she looks ahead, Diana is grateful for the community she’s found through PanCAN – she participates in advocacy activities locally and in Washington D.C. and PanCAN PurpleStride – and for the relationships she’s formed with patients and families over the years.

She always urges them to stay positive and to focus on what their bodies need, whether it’s an orange, Mexican food, or those crab legs.

“It’s a mental exercise -- it’s going to be an every day battle until you get through the worst of it,” she says. “But every day that you can get something good in your body nutritionally just sets you up for a better day the next day.”

And PanCAN is always there to talk through the challenges when it comes to diet and nutrition or any other concerns.

“Pancreatic cancer is one of the toughest on a patient’s digestive system,” Diana said. “Knowing where to go for answers, where to find the right questions to ask your provider and uncovering resources to walk you through your journey is all in one place…PanCAN.org.”