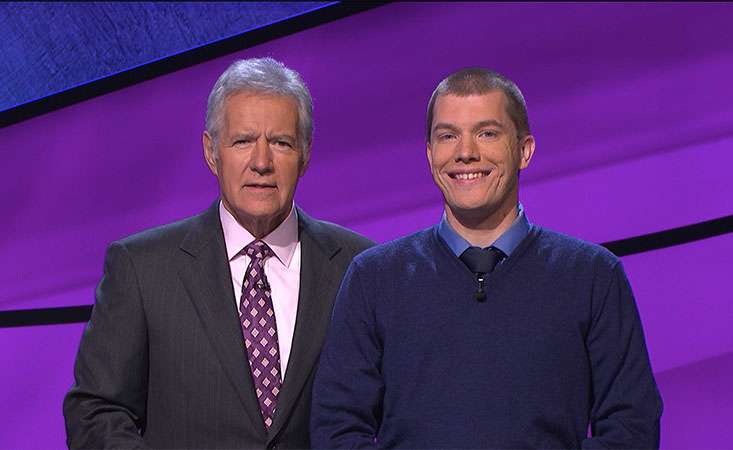 Editor’s note: Jason Idalski was a contestant on “Jeopardy!” in October 2013 and won nearly $36,000 over three days. Here, Jason shares how Alex Trebek has inspired him, especially now as he faces his own cancer fight.

The phone call came from my friend Jeremy.

I didn’t think much of it at the time; I was outside doing yard work and didn’t even feel my phone vibrate. It was only when I came back inside, checked the Twitter feed of a political writer I like, and thought, “Why is he randomly tweeting a bunch about Alex Trebek…uh-oh.”

A quick Google search confirmed my fears, and Jeremy’s voicemail was about Alex’s death from pancreatic cancer and checking in with me to see if I was OK. No doubt countless “Jeopardy!” contestants got similar calls.

I sat and cried for a bit, but my bigger worry was that I seemed to have zero stamina.

Normally I can be on my feet for a couple hours or so at a time raking leaves, but Saturday I had to rest about every half hour and Sunday was even worse; I felt like I was up, a few swipes of the rake for five minutes, extreme shortness of breath and the need to rest.

I also had unexplained bruising, which my trainer unhelpfully guessed could be due to sleepwalking. The loss of appetite, rash/petechiae and extreme fatigue in general would come later, as would feeling feverish without actually running a temperature, or being able to hear the blood slosh in my head as I turned from one side to another in bed.

When I checked myself into the ER almost two weeks after Alex’s death, I learned I have leukemia.

It’s a little weird to think that on the day Alex died I did an interview for local TV news that evening about Alex, watched the Steelers slog past the Cowboys, learned I’d been exposed to COVID (which certainly complicated my diagnosis over the next two weeks)…all of that while my body was trying to kill me and I didn’t even know why.

I was in the hospital from Nov. 20 through Dec. 8, but my white count elevated sharply two weeks after I was discharged, so I had to check myself back in on the morning of Christmas Eve. The night before, my mother wanted me to open a couple gifts I was getting that might be good for me to have in the hospital…kind of a pre-Christmas (now that Christmas would have to be post-Christmas).

One of them was a gift I knew about: a long-sleeved shirt that says, “Jeopardy! Contestants: Alex tested, Maggie approved,” around a picture of (now-retired) “Jeopardy!” contestant coordinator Maggie Speak (proceeds benefit PanCAN).

For whatever reason, my eyes focused on the Alex and I thought about what he went through and started crying.

As I cried at the Alex montage at the end of his last episode, the airing of which happened to coincide with the day I was re-discharged, yet another parallel between us. A friend wrote in a Christmas card, “You’ve got a bunch of people down on Earth pulling for you + I know Mr. Trebek is up in heaven doing the same.”

I don’t know about that, but I do know that Alex was an inspiration to me in life, and the way he dealt with his diagnosis and treatment make him an inspiration in his death.