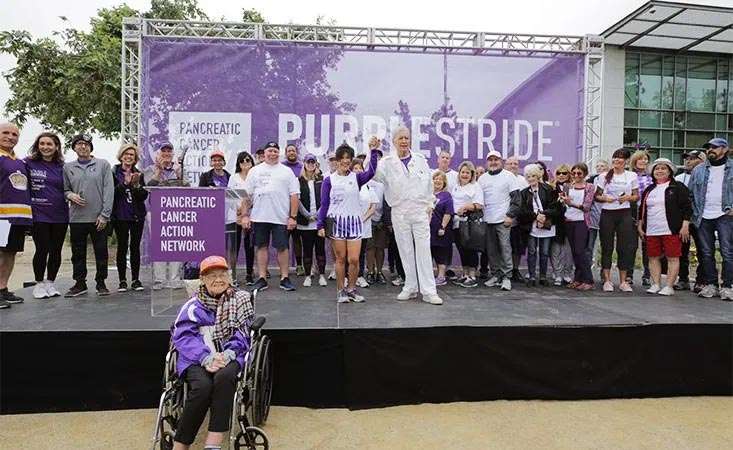 We join the world in mourning the death of Alex Trebek, who had stage IV pancreatic cancer. The longtime host of TV’s “Jeopardy!” announced his diagnosis more than a year and a half ago on March 6, 2019.

“We are deeply saddened by Alex’s death,” said Julie Fleshman, JD, MBA, president and CEO of PanCAN. “We will forever be grateful for the awareness he brought to the disease and the cause – and especially his openness in sharing his experiences.”

Trebek’s death comes during November, which is Pancreatic Cancer Awareness Month. He singlehandedly raised tremendous awareness about the disease and how it can impact patients.

Courageously, Trebek publicly discussed some of the physical and emotional symptoms and side effects caused by the disease and its treatment – ranging from pain and hair loss to deep feelings of despair.

Just two months after his diagnosis, Trebek was surrounded – and inspired – by fellow survivors at PanCAN’s PurpleStride Los Angeles 2019.

“Jeopardy!” staff and friends formed Team Alex in his honor – close to 200 team members raised nearly $60,000 for the cause. 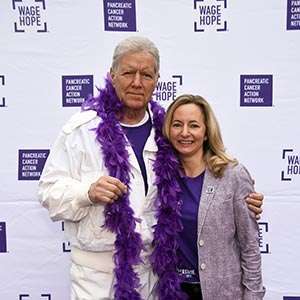 At the opening ceremony, Trebek addressed the crowd and noted that the other survivors there helped remind him there’s always hope – something he paid forward to countless others throughout his journey.

A comment on PanCAN’s Instagram post following Trebek’s participation in the walk said, “Thank you, Alex. I lost my husband of 40 years to pancreatic cancer after only five months. Thank you for your honest revelation and supporting PanCAN.

“We need celebrities to support our cause to bring pancreatic cancer out in the open and encourage and support research!”

Trebek often spoke about how encouraging it was to hear from others.

“People all over America and abroad have decided they want to let me know now, while I’m alive, about the impact that I’ve been having on their existence,” he said in an interview with ABC’s Michael Strahan in December while promoting the “Jeopardy! Greatest of All Time” tournament.

“They have come out and they have told me, and my gosh, it makes me feel so good.”

To pay tribute to Trebek, share a story on PanCAN’s Honor Wall and make a donation in his memory to fund research and support critical patient services. You can also set up your own personalized tribute fundraising page in his honor.

Elise Tedeschi, an eight-year stage IV pancreatic cancer survivor and volunteer with PanCAN, reached out to Trebek with an open letter shortly after his diagnosis. Her letter was shared by CBS News and many other media outlets.

“Like you, Mr. Trebek, I had an outpouring of love and support (on a much, much, much smaller scale). I was astounded by the kindness and sheer beauty from friends and even complete strangers,” she wrote.

“By every measure, Trebek’s diagnosis and openness have impacted PanCAN and our efforts,” Fleshman said. “We saw an immediate and sustained increase in the number of people visiting our website for information and resources, more people donating to the cause, more people registering for PurpleStride events and more.

His participation in the PSA made headlines around the world, and the video was seen by millions of people.

But his impact went beyond making people aware of pancreatic cancer.

The “Jeopardy!” team shared a heartwarming story. They said someone reached out and told them their loved one had seen Trebek’s video, recognized the same symptoms in himself, and he was diagnosed with pancreatic cancer at a very early – and hopefully more treatable – stage as a result.

Survivor Chuck Paulausky recently shared his story of an early diagnosis thanks to the Trebek PSA.

“Today, as we celebrate Trebek’s life and grieve his death, PanCAN commits to redoubling our efforts to improve outcomes for everyone diagnosed with pancreatic cancer, in honor and memory of Trebek and so many others,” Fleshman said.