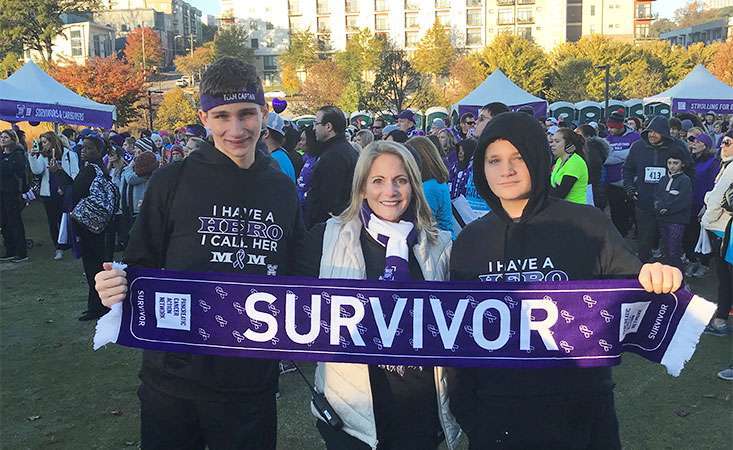 Editor’s note: Elise Tedeschi wrote an open letter to “Jeopardy!” host Alex Trebek, who announced last week that he was diagnosed with stage IV pancreatic cancer. Tedeschi, who received the same diagnosis in 2012 and is today a six-year survivor, shared words of encouragement. Her letter, available below, has been covered by media outlets like CBS news and FOX news.

Dear Alex Trebek: I Survived Stage IV Pancreatic Cancer, So I Am Proof That There Is Hope

I was filled with fear, sadness and disbelief. I thought, “How is this even possible?” I was married to the love of my life for 11 years; I had two amazing boys, Jake (then 8) and Ryan (then 6); and a job that I absolutely loved. But my life, as I knew it, changed forever in an instant.

So on January 6, 2012, the decision to fight was an easy one, because there was no way that I was leaving my little boys and no way that anyone else was going to marry my husband!

Like you, Mr. Trebek, I had an outpouring of love and support (on a much, much, much smaller scale). I was astounded by the kindness and sheer beauty from friends and even complete strangers.

My family became my prayer warriors, my caregivers and my security. My husband held down the home front; he would even carry me upstairs when I was too weak. My boys thought it was so funny, but I loved that they had this kind of role model — and I did think it was really romantic!

My besties became my sons’ surrogate moms, taking them to swim practice and endless fun activities. The good far outweighed the bad.

I ended up doing 12 rounds of chemotherapy, 25 rounds of stereo tactical radiation along with a 24/5 (24 hours a day, five days a week) chemo pump and then a cutting-edge surgery, called the IRE or NanoKnife. I also did some more post-surgery chemo.

Guess what?! I beat the crap out of stage IV pancreatic cancer and have been in full remission for six and a half years.

So Alex Trebek, go kick cancer’s butt — it has no chance against you! You got this!

Elise Roth Tedeschi is a marketing, sales and public relations consultant, currently finishing up a project with City Winery. Tedeschi is currently writing a book about her incredible journey with cancer and will be looking for a literary agent.  Tedeschi is also the Atlanta affiliate chair of the Pancreatic Cancer Action Network.