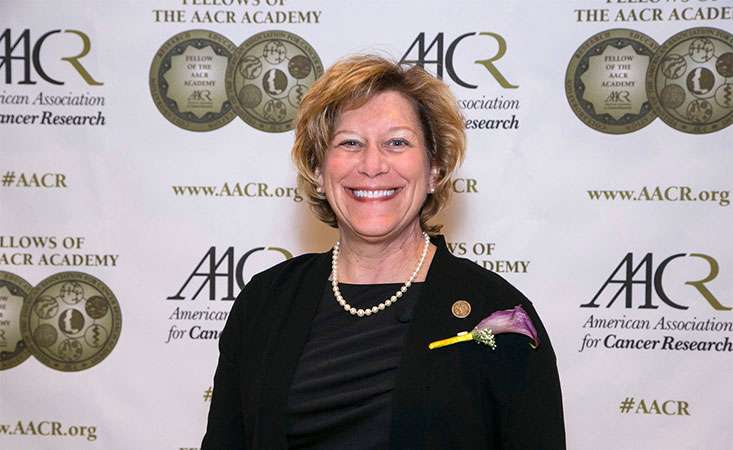 Lynn Matrisian at an AACR event

An interview with Lynn Matrisian, PhD, MBA, chief science officer at the Pancreatic Cancer Action Network (PanCAN), appeared in STAT News today. Matrisian’s commentary is in response to major research findings suggesting fat tissue wasting may occur in early pancreatic cancers and may serve as an early indicator of the disease. The findings were published in the prominent journal Nature.

The study, co-led by PanCAN grantee Brian Wolpin, MD, MPH, was primarily conducted at Dana-Farber Cancer Institute and the Koch Institute at MIT. The research team studied peripheral tissue wasting, which refers to the deterioration of otherwise healthy tissues surrounding the tumor. Their surprising finding was that adipose (fat) tissue wasting occurred early in the disease progression.

The STAT News article credits Matrisian as saying that “one of the most exciting implications of this study is the possibility of using early peripheral fat wasting as a warning sign for pancreatic cancer.” Discovering clues to improve the ability to diagnose pancreatic cancer earlier is a key priority of PanCAN and the research field.

Matrisian is one of the foremost experts in the field and has published over 200 original scientific articles and trained more than 30 young scientists who have gone on to join the fight against cancer in the academic, biotechnology, pharmaceutical, government and nonprofit sectors. Earlier this week, Matrisian joined a prestigious panel of scientific and clinical leaders at PanCAN’s National Pancreatic Cancer Advocacy Day, where they discussed key topics surrounding the diagnosis and treatment of pancreatic cancer.

PanCAN recently wrote about the topic of muscle wasting, known as cachexia, which was referenced significantly throughout the Nature study. Cachexia is a debilitating pancreatic cancer symptom that typically occurs later in the disease progression, as opposed to the research team’s findings that fat wasting can take place earlier.

If you have questions about this study or the diagnosis, treatment, symptoms or side effects associated with pancreatic cancer, PanCAN Patient Services is here to help.

Of all the places to get cancer, the pancreas may be the worst. Difficult to detect and nearly impossible to treat, pancreatic cancer is the only major cancer with a five-year survival rate below 10 percent. New research, published Wednesday in Nature, challenges some widely held assumptions about the disease and could eventually help doctors diagnose patients earlier, when treatments are most effective.

The study’s findings came from investigating how early pancreatic tumors affect peripheral tissues — mainly muscle and fat — in both mice and humans.

Doctors have long observed that many pancreatic cancer patients experience debilitating tissue wasting. Researchers have been working to stop or even reverse such loss, although they still don’t understand the biological forces that drive it or whether reversing tissue wasting improves survival.

One leading hypothesis is that pancreatic tumors release a chemical signal or factor that travels throughout the body promoting the breakdown of muscle and fat. However, the new study — by a team of scientists from the Koch Institute for Integrative Cancer Research, the Broad Institute, and the Dana-Farber Cancer Institute — suggests otherwise.

During a key experiment, scientists implanted early-stage pancreatic tumors into different body parts of otherwise healthy mice. Tumors under the skin did not cause tissue wasting, arguing against the idea of a circulating chemical signal. In contrast, tumors placed in the pancreas caused dramatic decreases in fat tissue. Further analysis demonstrated that the tumor had interfered with the pancreas’ ability to secrete digestive enzymes. Unable to obtain enough nutrients from food, the mice had entered a mode of starvation in which their bodies broke down peripheral fat to survive.

Dr. Jeffrey Drebin, chair of the department of surgery at Memorial Sloan Kettering Cancer Center and professor of surgery at Weill Cornell Medical College who was not affiliated with the study, found the transplantation experiment “very compelling.” Researchers have been searching “for a serum factor, something secreted by the cancer, with the idea of blocking it, but maybe it’s not that at all.”

More surprisingly, additional experiments suggested that peripheral tissue wasting, when it occurs early on in cancer development, is not necessarily a bad omen for mice and humans. When scientists fed cancer-ridden mice food supplemented with pancreatic enzymes, they were able to prevent loss of fat tissue. Despite this, the supplemented mice did not live longer than their counterparts on a normal diet.

Concordantly, analysis of medical records from 782 human patients drawn from five different hospitals showed no association between their degree of tissue wasting at the time of pancreatic cancer diagnosis and length of survival.

According to Dr. Matthew Vander Heiden — one of the paper’s senior authors, a member of the Koch Institute, and a physician at Dana-Farber — the results don’t rule out old ideas but open up new possibilities for how pancreatic cancer and tissue wasting affect patients.

“This study doesn’t mean that secreted factors are not important,” he said, “but we can at least argue that not all tissue wasting is driven by the same mechanism.” Similarly, “pancreatic cancer patients clearly have a lot of tissue wasting and whether it’s good or bad, we can now say that it’s not necessarily bad at diagnosis.”

Of Mice and Humans

According to Lynn Matrisian, chief science officer at the Pancreatic Cancer Action Network, one of the most exciting implications of this study is the possibility of using early peripheral fat wasting as a warning sign for pancreatic cancer. Because pancreatic cancer is so aggressive, by the time the initial tumor is detected, cancer cells have often spread to other organs. To improve detection, scientists have been trying to understand tumor characteristics that will allow for early diagnosis and give patients an increased chance of survival.

“Our sense is that peripheral tissue wasting predates [other signs of the disease],” said Dr. Brian Wolpin, one of the senior authors and director of the Gastrointestinal Cancer Treatment Center and Hale Center for Pancreatic Cancer Research at Dana-Farber and Harvard Medical School. “This is certainly true in mice … and we have some hint of that in people but we are in the process of doing a large study to understand that better.”

In a previous collaboration, Wolpin and Vander Heiden demonstrated that signs of muscle wasting could be detected in a person’s blood up to five years before they were diagnosed with pancreatic cancer. Whether changes in fat and muscle composition also occur at such an early stage remains to be tested.

Wolpin and Vander Heiden don’t imagine that a single blood test will definitively diagnose pancreatic cancer but that several changes in body chemistry could, together, reveal an increased risk. As an analogy, Vander Heiden looks to heart disease, in which risk is determined by multiple factors, such as high blood pressure, diabetes, and cholesterol levels. “The same will be true of cancer,” he said. “You will probably need multiple things, and I think this [early tissue wasting] could be one of them.”

Wolpin and Vander Heiden also want to uncover why tissue wasting happens and its effect on patients. It remains an open question whether tumors in humans are preventing the pancreas from releasing digestive enzymes, as is the case in mice. Similarly, results in mice raise questions about the practice of preemptively prescribing pancreatic enzymes to prevent tissue wasting. More studies and clinical trials are needed to determine whether helping patients avoid fat loss early on in their disease progression is helpful.

When considering how fat loss affects patients, Derbin pointed out that tissue wasting probably takes many different forms. In fact, aside from pancreatic cancer, patients with colon cancer, lung cancer, and other forms of cancer also experience muscle and fat loss. “They don’t, to our knowledge, have anything going on with their pancreas, “said Derbin, “so that might be a different nutritional pathway.”

Wolpin is also careful to distinguish the peripheral tissue wasting observed in this study, which is relatively mild, from cachexia or severe tissue loss associated with late stages of cancer when patients are close to death. “You should be thinking of cachexia as possibly different from peripheral tissue wasting,” he said. “They could have a very different biology and likely are not the same.”

For Vander Heiden, the main takeaway from the study is the importance of understanding cancer in detail, regardless of what organ it began in or how far the disease has progressed. In cancers that secrete factors triggering tissue wasting, helping patients gain weight could be helpful. Other cancer patients may have tissue wasting caused by a different mechanism, which actually helps them survive.