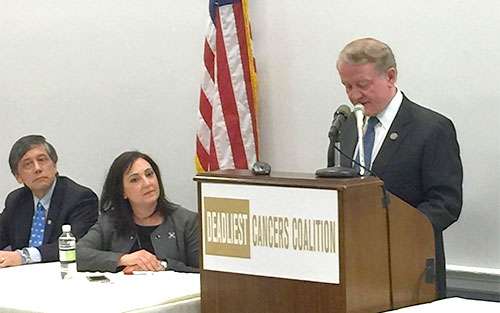 From left, Timothy Wang, MD, Megan Gordon Don and Rep. Leonard Lance were part of a panel who addressed Congress at the briefing.

The deadliest cancers in the United States are defined by the Recalcitrant Cancer Research Act, legislation the Pancreatic Cancer Action Network spearheaded, as those with five-year survival rates below 50 percent – including cancers of the pancreas, lung, liver, esophagus, stomach, brain and ovary.

A standing room-only crowd assembled for a congressional briefing on our nation’s deadliest cancers.

To draw much-needed attention to these cancers, the Deadliest Cancers Coalition was established in 2008 by the Pancreatic Cancer Action Network. There are now more than 20 other patient advocacy organizations who are members.

And in 2014, the Congressional Caucus on the Deadliest Cancers was launched by Representatives Henry Waxman (D-CA), Leonard Lance (R-NJ), Anna Eshoo (D-CA) and Dave Reichert (R-WA) to ensure that members of Congress are aware of the unique challenges and societal burden of these diseases. The Caucus and the Coalition work together to raise awareness and advocate for increased federal research for these cancers.

“These seven cancer types make up almost half of all cancer-related deaths in our country,” said Megan Gordon Don, our vice president of government affairs and advocacy. “We ask Congress to keep this in mind during any cancer-related policy initiatives this year.”

Thanks to advocates like you, the Recalcitrant Cancer Act passed in 2012, generating new grant mechanisms to fund critical research, and the 21st Century Cures Act passed in 2016, authorizing the Cancer Moonshot Initiative at the National Cancer Institute (NCI) to make a decade’s worth of progress in cancer prevention, diagnosis and treatment research in just five years. But more must be done.

On March 2, the Coalition and the Caucus co-hosted a congressional briefing entitled Combatting the Deadliest Cancers: The Role of NCI Research, 21st Century Cures Funding and the Cancer Moonshot to educate members of Congress and congressional staff about these diseases and the critical role Congress can take to improve survival. The briefing garnered a packed, standing room-only crowd on Capitol Hill with nearly 100 attendees.

From left, Timothy Wang, MD, Megan Gordon Don and Rep. Leonard Lance were part of a panel who addressed Congress at the briefing.

Among the speakers was Representative Leonard Lance, one of the founding members of the Caucus. Lance addressed the room: “Everyone here contributed to the passage of the 21st Century Cures Act, the Recalcitrant Cancer Research Act and the many cancer research bills we have passed on the House floor.”

Lance went on to point out that “these events help policy and decision making, and we certainly want to continue this work in the 115th Congress.”

The researchers’ perspective was presented by Timothy Wang, MD, one of our grant recipients, who is professor of medicine and chief of the digestive and liver diseases at Columbia University Medical Center and the current president of the American Gastroenterological Association.

Wang highlighted the exceptional challenge of pancreatic cancer, with the lowest five-year relative survival rate and a lack of effective treatments or early detection strategies. He emphasized that this is a battle we can win but will need the support of Congress to do it.

The deadliest cancers need to be a priority, and improved outcomes for patients are dependent on the NCI receiving funding for both its ongoing work and for specific grants funded through the Cancer Moonshot Initiative that are both transformative and research-ready.

“Congress needs to have a sense of urgency in the fight against the deadliest cancers – funding both the basic and translational research at the National Institutes of Health, the NCI and the Cancer Moonshot,” commented Don. “We are thankful for the critical funding for the Cancer Moonshot through the 21st Century Cures Act, but it is not enough.”

Want to have your voice heard on Capitol Hill? Join us for the 10th anniversary of National Pancreatic Cancer Advocacy Day, June 19 – 20, in Washington, D.C.